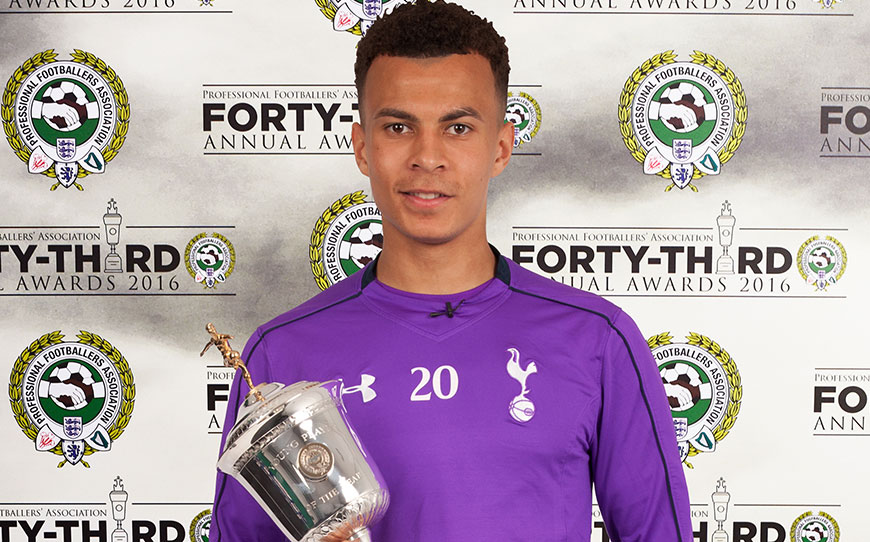 Tottenham and England midfielder Dele Alli has been named PFA Young Player of the Year for 2015-16.

The 20-year-old who was also in the PFA Team of the Year, has taken the Premier League by storm since signing from League One MK Dons last year, scoring 10 goals and providing nine assists in 32 league appearances for Spurs.

With Tottenham in action last night, Alli and Kane were unable to attend The PFA awards dinner at The Grosvenor House Hotel in London on Sunday evening.

Instead former Tottenham player and manager Ossie Ardiles accepted the award on Alli’s behalf though the player did give an acceptance speech via a pre-recorded message from the clubs training ground. He said;

“Thank you Ossie, the Tottenham legend for receiving this award for me.

“Sorry I can’t be there tonight but we have a big game tomorrow. Thank you to everyone who voted for me.

“I feel honoured to win such a prestigious award and thank you to my friends, family and all the staff at Tottenham.”

This time last term the England international was helping MK Dons to promotion from League One. Alli signed for Tottenham in January 2015 but was loaned back to MK Dons for the second half of the previous campaign,

The youngster was not expected to immediately break into Spurs first-team but he has been a regular since his first start in Tottenham’s fourth Premier League game of the season – an away win at Sunderland.

He was then called-up to the England squad for the friendlies against Spain and France in November and celebrated by registering his first international goal on his first start – a superb right-foot strike against France. Alli hit a wonder goal at Crystal Palace in January and recently starred in England’s recent 3-2 victory over Germany.