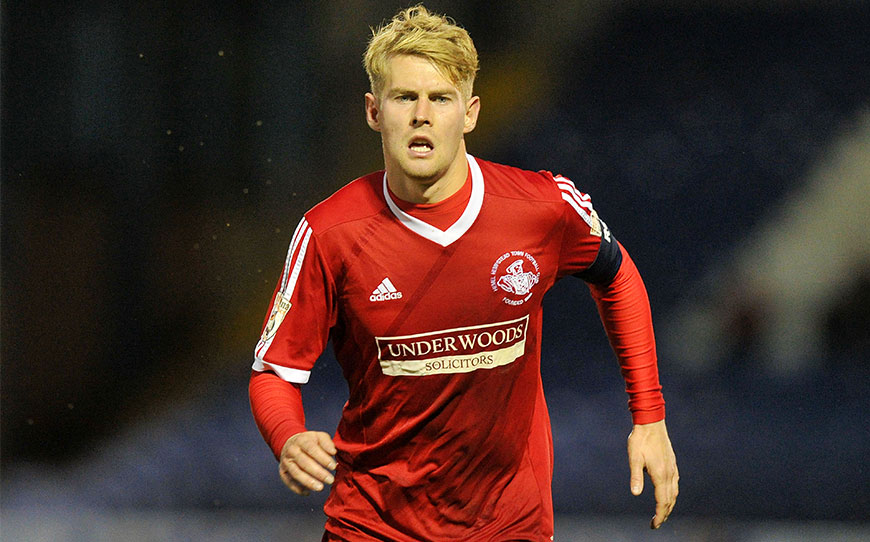 Ebbsfleet United manager Daryl McMahon insists the best is still yet to come from Jordan Parkes after the summer signing notched his fourth goal of the season in the 1-0 win at Dartford.

The former Watford apprentice scored 30 goals in all competitions for Conference South side Hemel Hempstead Town (pictured above) and has continued that goalscoring form at his new club.

“Jordan has a great understanding and reading of the game and he reads the situations as they come in a game and reacts so well. Technically he’s very good and he’s got a terrific football brain,” McMahon told the club website.

“Even outside of the box, when he’s trying to get on the ball from midfield, he balances off other players’ movement really well. If you actually watch him for any length of time, his movement’s terrific and when he gets in the box, he’s got the technical ability to finish.

“To get four goals in his first six games is a great start and I still believe there’s more to come from him. A lot more. I think he believes that as well. He’s his own biggest critic.”

The 26-year-old was once an England Under-18 international playing alongside the likes of Daniel Sturridge, Scott Sinclair and James Tomkins, but only featured in one league game for Watford before falling to League Two with Barnet in 2010.

“I went to Barnet but that was a difficult time for me, mentally. It was frustrating because they were struggling at the bottom of the league and I was playing at full-back, which was a position I didn’t want to play,” Parkes said.

“In the end I made the decision to come out of the pro game and sign for Hemel, to love the game again, to enjoy playing football.

“They gave me the opportunity to play in midfield, the chance to kick on and score goals and to show people what I could do.”

Three successful years at his local town club led to interest from Football League teams, but Parkes is again flourishing in the Conference South having landed with The Fleet.

“Macca (McMahon) got in touch quite early, just after they’d given him the job, saying Ebbsfleet were interested. I had interest from League and Conference clubs as well but everything seemed to work out fine with Ebbsfleet,” he added.

“The issue was that I was still under contract at Hemel and they wanted a fee, which put off the League clubs. It was a case of finding the right club, who were willing to pay the fee to Hemel.

“I liked the ambition of Ebbsfleet – the way they want to get promoted and then do well in the Conference as well.”