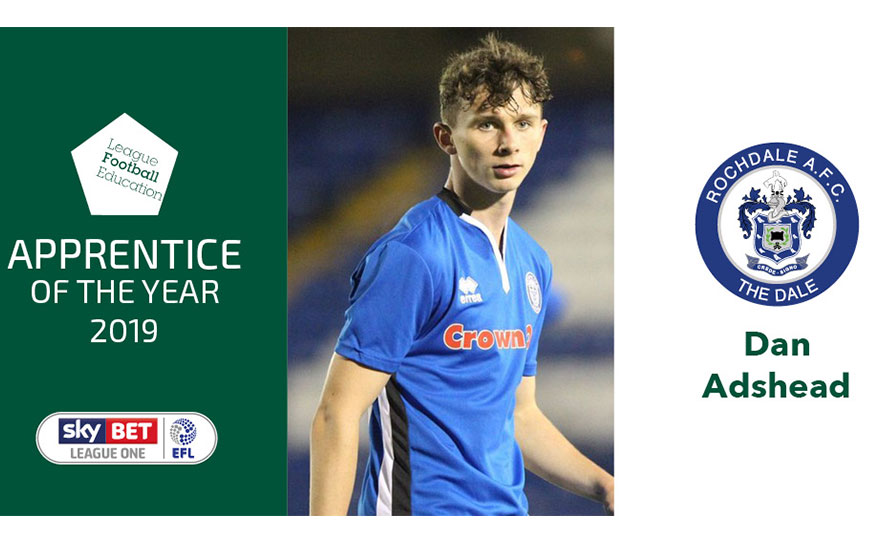 First-year apprentice Dan Adshead established himself as a member of the Rochdale first-team prior to even starting the apprenticeship, featuring nine times during the 2017-18 season, including a 15-minute cameo against Tottenham Hotspur at Wembley in an FA Cup fifth round replay.

Since becoming an apprentice, the highly-rated midfielder has continued to develop as a player. He captained Dale’s first-team in the Checkatrade Trophy against Leicester City Under-21s in November and also received his first England Under-18s call-up, scoring on his international debut against the Netherlands.

“It’s a massive honour for me, I’m really proud,” Adshead told LFE. “There are so many people I could thank – my parents of course, which goes without saying.

“They took me everywhere and still continue to do so, so without them I definitely wouldn’t have got this award. Also, the managers and players at Rochdale have been amazing.”

Adshead – who was named in LFE’s ‘The 11’ in December – penned a three-year professional contract just days after turning 17 in September, and yet has maintained motivation to stay on target with his education by using his spare time to catch up on work missed as a result of first-team duties.

“It’s all about the balance,” he continued. “We put a plan in place to fit my education around being with the first-team and we’ve done well so far. Of course, I love being out on the pitch, but the education side of it is important to me as well.

“Being in that environment at college keeps you grounded and I have learned a lot about leadership in the classroom that I have then been able to take onto the pitch.”

Tony Ellis, Academy manager, said: “Dan has been an exemplary apprentice. As a club, his potential was identified very early and he was in the manager’s eye from the age of 14. Dan is a credit to himself, his family and to the ethos of Rochdale AFC Academy.

“He exemplifies everything that Rochdale AFC is striving to achieve. He is a product of the Academy’s vision and philosophy. Without Dan’s talent, character and willingness to learn and improve, he would not be where he is today. He is a model apprentice and a fine young man with the potential of a great future in the game.”

Meanwhile, Rochdale Academy graduate Joe Thompson, who won the League Two Apprentice of the Year award back in 2007, told LFE: “Rochdale’s work that they’ve been doing around the Academy and with the young ones is great. I’m sure Dan’s going to have an unbelievable career, much better than mine.

“He’s already got that recognition of playing for England Under-18s and he’s got the right temperament, which is key to staying within the professional game. It’s his mentality – he’s very head-strong, he knows what he wants to do, he’s assured about his ability and he also does the right things off the pitch as well.”