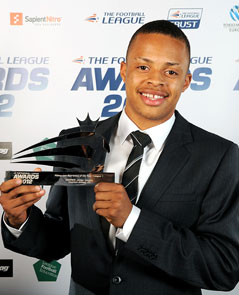 Charlton Athletic’s Jordan Cousins has been named the Kitbag.com Apprentice of the Year for League One at this year’s Football League Awards.

Jordan joined Charlton Athletic aged 12 and has progressed through the Academy to become a first team squad member. A local boy who joined his local Club, Jordan is also on track to achieve his academic targets.

On winning his award, Cousins said:

“I am very surprised but I am so thrilled to win this Award. I thought there were some very good players up for this Award so I am just shocked it was me who actually won it.”

“Everyone at the Club has helped me and they deserve a lot of praise too.”

“The Football League Awards 2012 has given us another opportunity to celebrate success at League Clubs both on and off the pitch. It gives us the chance to reward those who have demonstrated commitment beyond the call of duty or achieved great things. I would like to offer my congratulations to all the winners and all those who were nominated.”