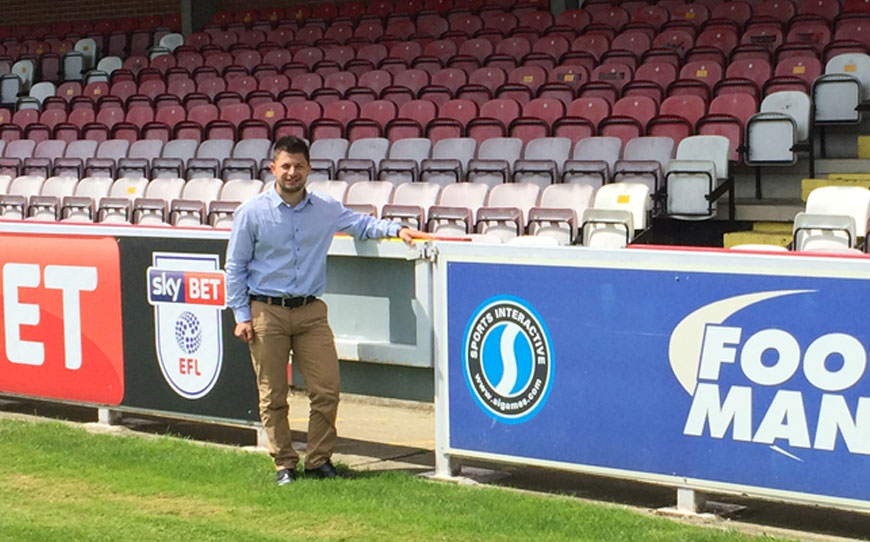 Former frontman Pietro Palladino is now found bringing in sponsors, dealing with caterers and ensuring fans and guests are happy on matchdays.

The former Wycombe Wanderers forward is plying his trade for AFC Wimbledon as a Commercial Executive. Touchline caught up with Palladino at the start of this season.

“My main roles are in the commercial department, maintaining sponsors by looking after them, managing staff and hospitality on matchdays, generally trying to increase revenue, and putting on events,” explained the diminutive Palladino.

“We had a pop-up shop when we got to Wembley for the play-off final, and we’ve just had a kit launch. I couldn’t have timed it better – us getting promotion in my first season at the club. I even had a bus parade to organise!”

Palladino was a successful apprentice at Wycombe in everything other than gaining a pro contract. He impressed coaching and teaching staff immensely with his positive attitude, determination to progress in all areas and willingness to do extra activities to help take the next step in the game. That included studying for the BTEC extended diploma, securing distinctions in every unit.

“Some team mates in the academy were not that academic and for them it was football or nothing. They were banking on it,” he added.

“None of my year group are still pros. I always had another plan and with the support of LFE, it got me into university at St Mary’s in Twickenham. If I hadn’t done the extra units I wouldn’t have got in there and I wouldn’t be where I am now. It was vital and I’m really glad I did it.”

“ I always had another plan and with the support of LFE, it got me into university at St Mary’s in Twickenham. If I hadn’t done the extra units I wouldn’t have got in there and I wouldn’t be where I am now.”

The year group below Palladino’s was strong. From that cohort, Anthony Stewart is back at Wycombe after a spell at Crewe, Kadeem Harris is at Cardiff and Josh Scowen is also in the Championship now with Barnsley. But Palladino soon realised that organising sport could be the pathway for him, rather than playing.

“I played for a few non-league clubs, but after my degree I was elected into a post at the students union, organising all the fixtures for every sports club at the university, working with the presidents, sponsors and organising events,” said Palladino. “That experience helped me get this job at Wimbledon.

“Being an apprentice made me grow up, take on a lot of responsibilities. It was my first full-time job and got me used to being punctual, disciplined, hard-working and looking after myself on and off the pitch. That stood me in good stead for work after football.”

So does Palladino still pine for playing and wish he was out there on the wing for the Dons, rather than bringing in revenue to help pay them?

“Of course! I always wish I was out there. That will never leave me. But I enjoy being involved in football,” he admitted. “I’m very happy here and it’s interesting seeing a different side to the game. I enjoy being in the back office. I think being an ex-player gives me a bit of an advantage because I know what the day-to-day of being a pro actually involves.”

“ I’m very happy here and it’s interesting seeing a different side to the game. I think being an ex-player gives me a bit of an advantage because I know what the day-to-day of being a pro actually involves.”

With the go-ahead for a new stadium at their spiritual Plough Lane home getting closer and closer, Palladino knows the club are on the verge of something very exciting.

He continued: “Everything will change massively with the new stadium. It will be an amazing time to be at the club.”