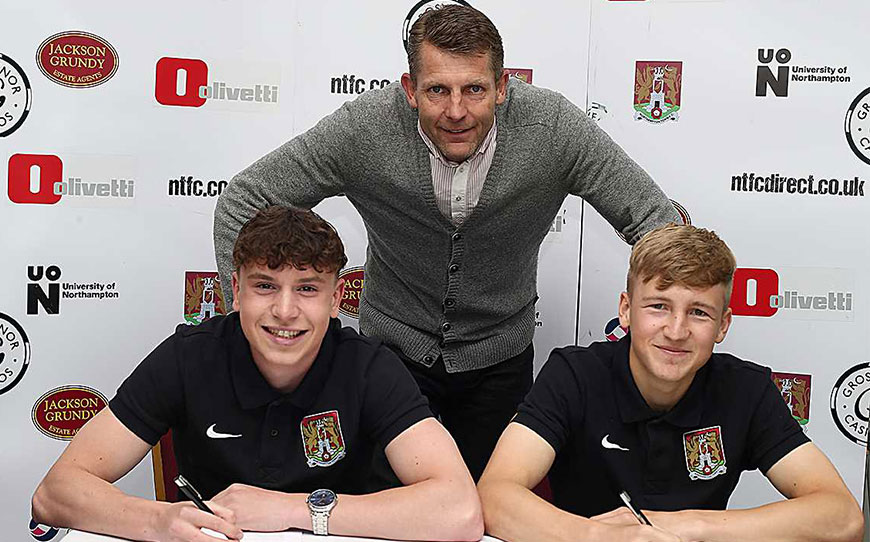 Northampton Town have tied up the futures of academy products Morgan Roberts and Sean Whaler by signing the pair on professional contracts.

Roberts, who has appeared in LFE’s Goal of the Month on two occasions this season, has signed a three-year deal, while Whaler is now contracted until the summer of 2020.

Both players progressed into the first-team reckoning in April, with Roberts making the bench at Blackpool and Whaler appearing as an unused substitute at Bury.

And while versatile 17-year-old Whaler is yet to receive his senior bow, set-piece specialist Roberts was handed a brief outing in the latter stages of a 2-2 draw on the final day of the season against Oldham Athletic.

“Both of the boys fully deserve their contracts,” said manager Dean Austin. “They have both really impressed me and are members of the first-team squad on merit. But, as I have said to them, this is where the hard work starts.

“We will be demanding the highest standards from all players and these lads will have to battle hard to secure a place in the first team, but that is their challenge and I have confidence in both of them.

“Morgan has a very mature attitude for a player so young. For someone who is creative, he enjoys the physical side of the game and he is very demanding both of himself and those players around him. I was impressed with the way he handled himself when he came on late against Oldham, he looked very much like he belonged.

“Sean has a lot of energy and pace and has developed his game to be a real goal threat. He is a very calm and composed finisher in front of goal and we have signed both of them because we think they can impact the first-team during the period of their contracts.

“It is always good to see local boys who have been with the Academy since they were very young come through and it does show the pathway working. With Shaun McWilliams already in the first-team squad and a very good group coming up behind Morgan and Sean, these are exciting times for all of us who believe in young players and believe in the work of the Northampton Town Academy.

“When you think of the players who have already moved on through EPPP, I think Trevor (Gould) and the team at the Academy here deserve a lot of praise for the players they are producing. It is a powerful message to all young footballers that the Northampton Town Academy is the place for talented local youngsters.”