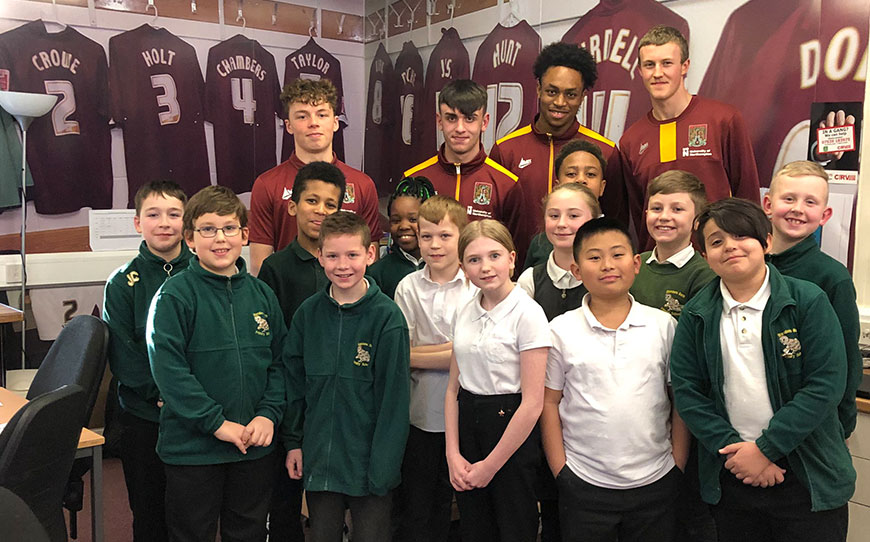 Northampton Town’s Academy system has made great strides recently, with the club showing commitment to developing their young talent.

Over the past two seasons, the Cobblers have established an impressive record, handing out eight professional contracts, seven senior debuts, over 100 first-team appearances and winning an EFL Youth Alliance South East trophy.

Lead PDP Coach Jon Brady has been at the heart of the planning process since taking over the Under-18s side in 2017.

He told LFE: “We’ve been lucky with the two most recent managers, Dean Austin and now Keith Curle, who have both been very keen to give our youth players opportunities to progress.

“Winning the Youth Alliance league was nice and it shows what we’re doing in training is working, but I think the proof in the pudding is appearances in the first team, because that’s our ultimate goal.”

Although progress on the training pitch remains a key piece to the puzzle, Brady highlights work off the pitch as the primary reason for their success.

“First and foremost, when we’re looking at young players, we make sure they’ve got the right attitude,” he added. “Are they willing to work extremely hard and put the extra effort in? Are they a good teammate and are they a positive character? Do they have resilience? All those values are really important to us before we even look at them technically and tactically.

“Keith Curle is very influential in helping players with the transition from youth team to first team. They design development programmes to keep them on track, so performance is observed and mental well-being is monitored through regular conversations.

“If you’ve got a player who feels good about himself, or is going through some issues but knows he has a support system to get through that, then they’re going to feel more comfortable and have more freedom to go on the pitch and perform. It’s fantastic that the players are a lot more willing to talk freely with us coaches, not just about football, but about life in general.”

A close connection between the coaching and education staff has been vital in devising an effective life skills schedule for the teenagers.

“Our Head of Education, Pete Stephenson, has been extremely influential in making sure that the boys have an extensive life skills programme and have a wide range of experiences, whether it’s talks or going out for community visits,” said Brady.

“It gets players to see the bigger picture, so instead of pinning all their hopes on football, they’re encouraged to build a life outside of football. Gaining these life skills gives players the capability to speak to potential employers, find another trade or further their education and be confident about themselves in order to do that.

“From my experience, when my sole focus was football, I felt such a huge pressure to perform. Then later on in my career, when I started my coaching business, I didn’t feel that pressure because I had other interests that I could fall back on, so I had more freedom to play.

I’m keen for the boys to have other interests and life allows that now, particularly with social media outlets. It’s important for players to switch off from football because you need that downtime.”

Second-year apprentice Scott Pollock is a prime example of a young footballer expressing himself in a variety of areas. Having shot to fame by winning Hashtag United’s YouTube Academy series in 2017, the 19-year-old has used his following of over 170,000 people across multiple social media channels to engage in a range of experiences.

Brady continued: “People have been able to see Scott’s pathway of trying to become a player online and that’s given him plenty of other opportunities to have interests outside of football. He’s very level-headed and down to earth about it as well, which you need to be to find that balance.

“Scott was in our Football Education programme prior to becoming an apprentice. During that time, he played at Wembley against some Premier League All-Stars and was named man of the match. Since then, Scott’s risen to every challenge that he’s been given and has now played over 20 games for his boyhood club.

“He’s been creative with making videos, he’s had some brand deals and he gets the chance to go to different events, so he’s making the most of his spare time while also keeping the right amount of focus on his football.

“Similar to Scott’s pathway, we’ve just signed Ethan Johnston from our FE programme. Working so closely with the education staff has allowed us to be regularly informed of whether all the boys are keeping up with their work.

“If they’re not, there can be consequences, so that adds to the motivation for them to continue working hard in the classroom. If they’re doing things right off the pitch, it’s setting great habits and standards to take onto the pitch.”

Throughout the quarantine period, the Northampton staff have maintained consistent contact with players across the Academy age groups to continue their personal development messaging.

Brady said: “It’s important for us to create a connection with families and making sure the boys are mindful of how they can make a positive impact at home, while also developing some important life skills.

“There is a difference between playing on a PlayStation all day and not really achieving anything, compared to helping out with the washing or mowing the lawn, or learning how to cook. These activities show that they can look after themselves and take ownership of their nutrition, which is important when considering the discipline and growth of any individual, not just as a footballer.

If we can create players that have the life skills to be a well-rounded person, that’s the most important thing for us. We want to develop youngsters that are good people off the pitch and good players on the pitch.”