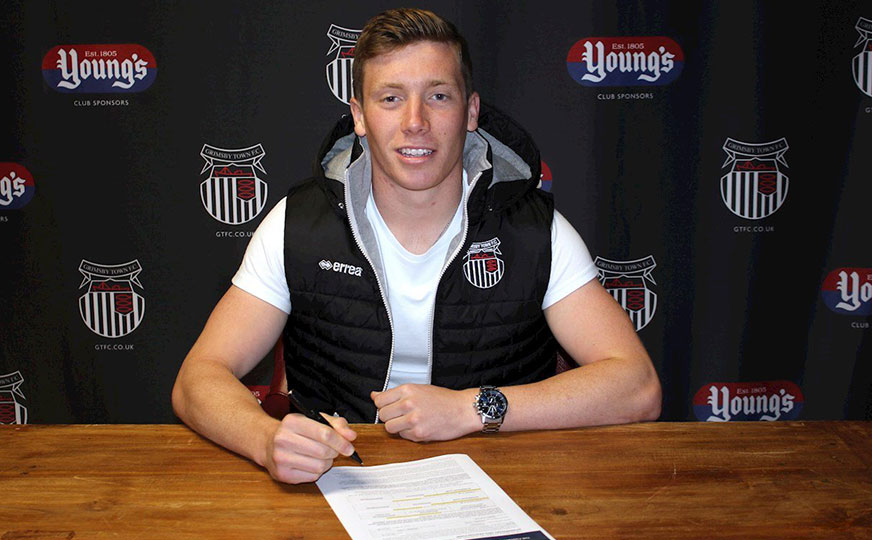 By Kelly Butterworth: Grimsby Town have tied up the future of midfielder Harry Clifton, signing a new three-year contract until 2021.

A year extension was triggered at the conclusion of the season, yet the 19-year-old has now penned a fresh deal with the club.

The academy graduate signed his first professional contract with the club at the age of 17 and made his breakthrough into the first team during the second half of the 2017-18 season. After featuring three times in the Checkatrade Trophy, Clifton made his Sky Bet League Two debut as a substitute away at Yeovil Town in January and was a favourite of recently-appointed manager Michael Jolley, appearing in eight of the 10 games since he took over as manager.

“Harry is fully deserving of his new deal,” Jolley told the club website. “He broke through into the first team last season and established himself as an important player for us during the run-in.

“Harry makes my job easier in this respect because he has qualities – energy, work rate and a great attitude, which make him an easy selection. He has technical quality too and I know that he will use this new contract as a platform to work even harder and continue improving as a player. His versatility and ability to play in several positions is a big strength for him and for us.”

Meanwhile, Clifton said: “I’m absolutely over the moon with it, I can’t wait to get started but to be offered a contract like this has really made me so happy.

“I am grateful to the gaffer. He started playing me towards the end and we got some really good results and he has obviously showed faith in me and is going to give me the time to develop and become a big player for this club. Obviously things can change in football, so I need to keep my performances up, keep my drive and hard work up or else I won’t be given these opportunities.

“The gaffer has told me to come back as strong as possible, which I’m planning on doing. Obviously there is going to be a lot of competition and nothing is guaranteed but with a contract like this it shows that he wants to work with me and develop me for a few years.

“I’ve got a decent reputation in pre-season based on my fitness and bits so I just can’t wait to get started. Obviously competitive fixtures are what you crave but you need the pre-season and these friendlies to get your sharpness back and develop and I can’t wait now to just be kicking a ball!”