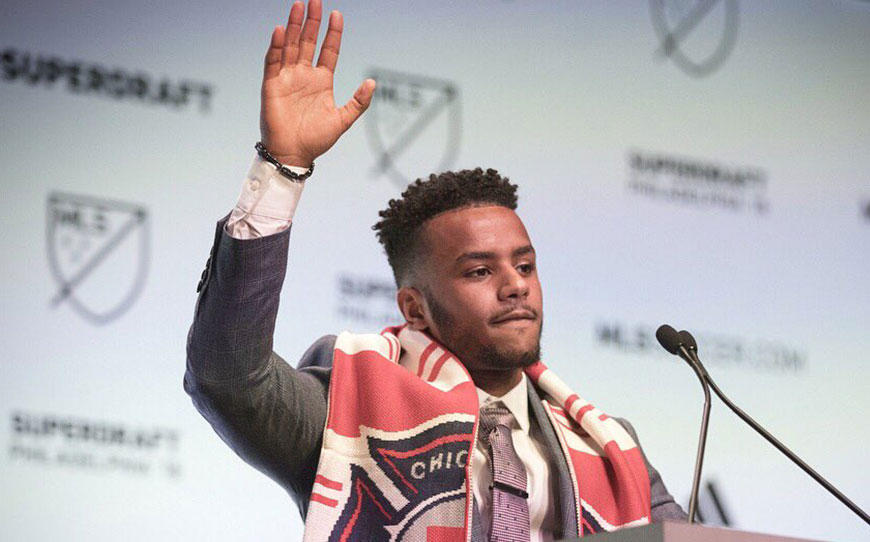 Two-and-a-half years ago, Mo Adams was released after completing his apprenticeship at Derby County.

Fast forward to the present and he has at last realised his dream of becoming a professional footballer after being drafted by Major League Soccer club Chicago Fire.

“Ever since I could walk it’s been a dream of mine to be a professional soccer player,” Adams told the club website. “I had some interviews (with Chicago) and met with the coaching staff and there was some good interest there and I could sense something happening.

“When you’re sitting down, waiting to hear your name called, you don’t know what to expect. It’s a bit of sigh of relief to finally be able to call myself a professional soccer player but you know it kind of shows all the sacrifice and hard work I put in finally paid off.

“I’m pleased it’s this team and I’m very excited for the opportunity to be able to play with some unbelievable players and it’s just a dream come true for me.”

The 21-year-old almost took a very different path, however, when he looked set to sign for Blackburn Rovers following a successful period on trial in 2015, only for a long-term ankle injury to scupper his hopes.

Undeterred, Adams turned his attention to America, seeking a scholarship at Syracuse University, where he played football alongside studying for a Business Management degree.

The defensive-midfielder excelled in his new home, being named to the All-Atlantic Coast Conference freshman team and third team All-ACC in his freshman year.

Adams continued to progress on the pitch in his Sophomore year, serving as a team captain as well as being named to the All-ACC second team before declaring for the 2018 draft by signing a contract with Generation Adidas, a joint program between the MLS and Adidas.

And the Fire traded up to the tenth pick to select Adams, meaning he will team up with a number of established internationals, most notably former Manchester United and Bayern Munich World Cup winner Bastian Schweinsteiger.

Adams said: “Bastian Schweinsteiger has been my idol growing up and now he’s my team-mate, so it’s going to be something that will shock me for a while, but I’ll get used to it.

“To be around those players, I’m looking to learn from each and every one of them every day, I’m all ears.