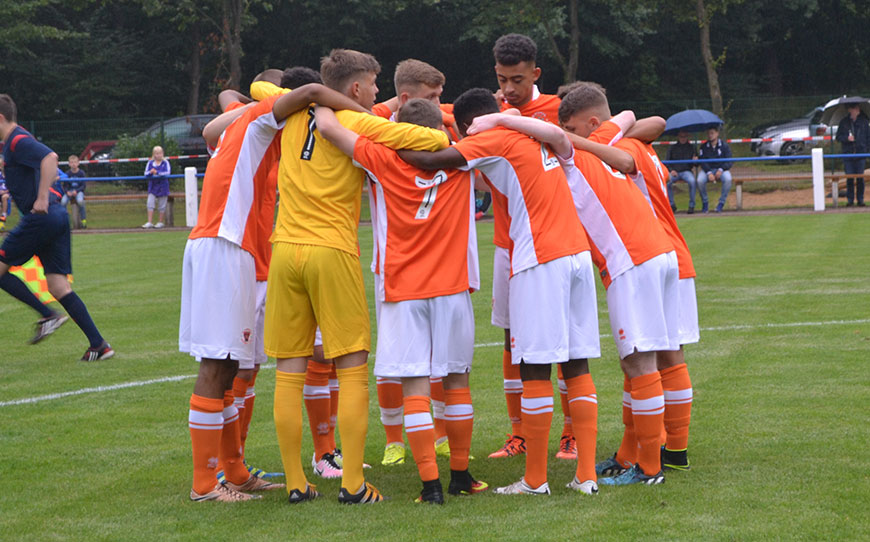 Blackpool Under-18s kicked off their LFE trip with a frustrating 1-1 draw against German side Osnabruck Under-19s.

Having made the hour-and-a-half coach journey across the border from Delden, Netherlands, Rowan Roache’s first half equaliser was all the Tangerines could produce in front of goal, despite a dominant display.

The hosts barely had a kick of the ball in the opening stages as they sat deep, allowing Pool complete control of possession.

And the Seasiders almost took advantage when Dylan Sumner’s volley was tipped away by the keeper into the path of Jack Steele, but the Osnabruck stopper recovered well to brilliantly deny the rebound.

After showing little attacking intent for the first 15 minutes of the game, the German team suddenly burst into life and took the lead after a well-worked counter attack ended with a tap in, following a square ball across the goal.

Blackpool remained disciplined and continued to command proceedings, with Roache testing the keeper from set pieces.

And after a couple of sighters, the Republic of Ireland Under-16 international found his range on the stroke of half-time, drilling a free-kick from the edge of the area through the wall and into the bottom left corner to level the scores.

After the restart, Blackpool piled on the pressure in a bid to break down the stout German defence and came inches away from doing so when Alwyn Flynn cut inside from the right and slotted a left-foot shot against the far post.

Frustration continued to build for the touring team as defender Ben Jacobson missed the target with a free header from a corner, while substitute Ralph Chea had the ball in the back of the net, only for it to be ruled out for offside.

But despite a positive performance from Ciaran Donnelly’s side, they failed to grab a deserved winner as Osnabruck held on valiantly for the draw.