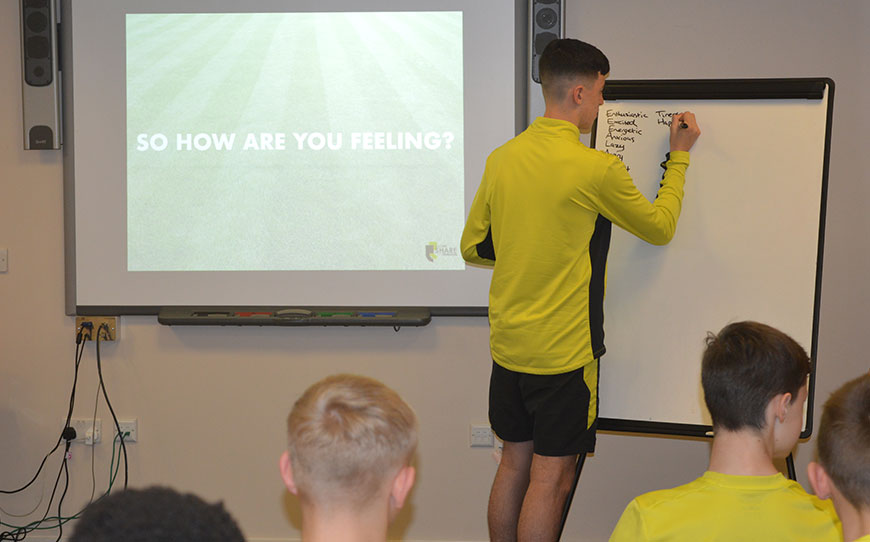 Blackburn Rovers highlighted their commitment to raising the profile of emotional well-being within the club by organising a Mental Health Awareness Week for Academy players, parents and staff.

In conjunction with LFE’s life skills programme, Rovers welcomed If U Care Share to the Brockhall Academy Training Ground to deliver their workshop, led by Matthew Smith, to players and parents from the Under-12 to Under-16 age groups.

“Over the last 18 months it’s been pretty evident the amount of footballers that have come out and talked about suffering at some point with mental health problems,” Blackburn’s Head of Education Neil Chadwick told LFE.

“We felt it was important as an Academy that we address these issues, not just with players but also with parents and staff as well because we know it’s a pressured environment, so we felt we had to do something to raise the awareness of what you might feel. You will feel rubbish sometimes and it’s about raising the awareness of talking about things.

“We’re trying to make sure that physical health and mental health are seen on an even keel in terms of how you would address and deal with it. We’re a big believer that if you’re happy and you’re enjoying yourself and you’ve got a smile on your face, it will have more of an impact on your performance.”

If U Care Share have visited LFE Apprentices across the country since 2010 to promote their mental health and well-being seminar.

Session leader Smith said: “No matter what age, at some point in their lives, these lads are going to face rejection and possibly what they might perceive as failure. It might be at 15 or 16, it might be at 18, it could be when they retire. The more we can do around when that actually comes round and how to deal with and how to react to it, the better.

“I’ve seen a culture change, I’ve seen from the first season when clubs were still of the opinion that this is separate to football. But I think what Blackburn are doing and what Neil’s trying to do this week is evidence that we are changing. You can see football actually trying to grab a hold of this and acknowledge that we have the ability within football to help so many people and share a really important message.