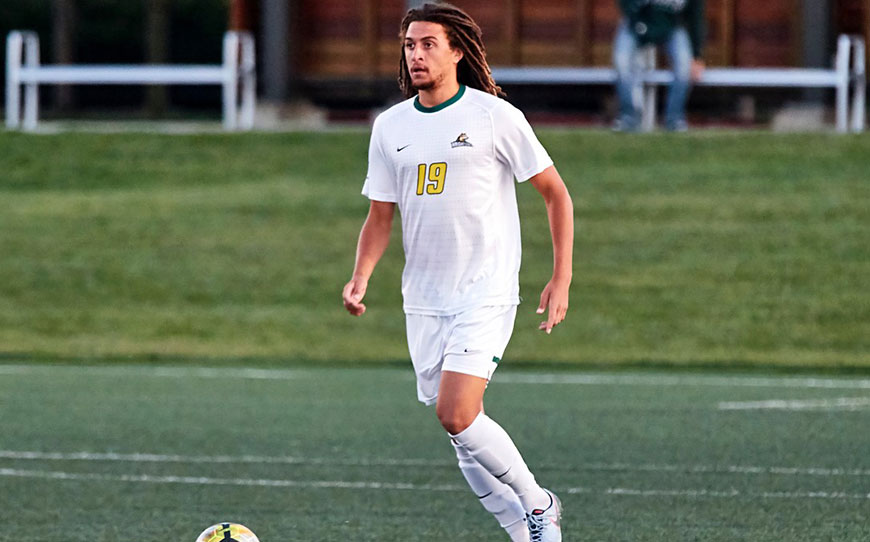 Dan Bent has enjoyed a significant upturn in fortunes since undertaking a soccer scholarship in the USA. In 2015, he was released by Gillingham at the end of his apprenticeship, yet has now been voted in the top 100 prospects for the new college soccer season.

The 22-year-old was listed as the 84th best college player in the country and second in the Horizon League conference by Top Drawer Soccer as a result of three stellar years in the States.

“It is a great achievement and one that shows the hard work I have put in over the years,” Bent told LFE. “It feels great to be recognised for my achievements on the pitch, but hopefully I can carry this into this season and have another great year.”

He certainly got off to a flying start as a senior, netting the winner in a 3-2 victory over UNC Asheville in the 2018-19 season opener.

It’s been an unlikely rise for the powerful defender, who was playing in the Kent League for Corinthian FC and preparing for a career in coaching until he became an apprentice with the Gills at the age of 17, having spent a year in sixth form.

He said: “At a young age I trained with a coaching company called Pro Soccer Academy. I started off just staying behind helping pick up the gear, then I would get there earlier to help set up the session.

“As I got older I got more involved and got to see what coaching was really like from behind the scenes, which made me realise that it was something I loved to do.”

Bent continued coaching alongside his playing and academic commitments at Gillingham, which he believes helped his development as a footballer and on a personal level.

“I was a pretty shy kid growing up but coaching allowed me to get out of my comfort zone,” he said. “It certainly helped with my people skills and communication skills on and off the pitch.

Coaching helped me grow in confidence and mature at a young age. Being a part of different drills and running them myself opened a completely new perspective of football that I hadn’t seen. It allowed me to learn football in a different manner and that definitely improved my ability as a player.”

Despite completing his apprenticeship without a professional deal, Bent had already planned his next move, with help from Pass4Soccer, as he embarked on a soccer scholarship at Reinhardt University in Georgia.

“I was always prepared for an alternative option,” said Bent. “Initially, I was disappointed when I knew I wasn’t going to get a contract, but having other options meant I did not dwell on it and instead I already had a new pathway to look forward to. Naturally, I had some fears, but I knew it would be a great option for me to continue my career.

“It’s not much different to being an apprentice back home, except for the fact that you’re a student first and a player second. The first few weeks were tiring as you try to adjust to the schedule of classes and practices, but it quickly becomes the norm.”

Bent’s ambition to maximise his potential led to him transferring to Wright State University after his freshman year, where he has flourished on the pitch.

He said: “My first school was small, only around 3,000 students. Moving to Wright State, with a bigger campus and over 18,000 students, was a big change. But the life of a student athlete is great. You wake up, have your classes in the morning, practice in the afternoon and relax at night.

“The standard on the pitch is very high, with players from all over the world sharing the same goal. I’ve played with and against players who came from Premier League clubs and players who have played at the top tier in their country.

“Just like back home, every team has its identity, whether they are a long ball style team or a possession-based team. It can depend on the school you’re at but many schools over here could give teams a test back home.”

The 6ft 1in centre-back has been a major success in Ohio, contributing to Wright State Raiders’ first ever Horizon League regular season title and earning multiple individual accolades, including being named to the First Team All-Horizon League, Second Team Great Lakes Region Team and First Team All-Ohio Team, as well as receiving the Horizon League Defensive Player of the Year award.

And his hopes of an extended playing career have been boosted by a successful stint in the Professional Development League for South Carolina United Bantams, plus seeing three of his former Raiders team-mates get drafted by Major League Soccer clubs New York City, Seattle Sounders and Colorado Rapids, respectively.

Bent continued: “The PDL is a great way to keep yourself fit over the summer and it is where the majority of the best players from college play. Testing myself against the best is always fun as I know the benchmark of where I am at and where I need to be.

“It is great to have players before me with so much talent get drafted. I am able to see what needs to be done and learn from their mistakes. It gives me great inspiration.

That’s the great part about the US, as not only will I come away with an education having played full-time football, but also there is the opportunity to progress my career and become a professional.”

Bent has not restricted his efforts to the playing aspect, becoming one of 99 Wright State student athletes to be placed on the 2018 Spring Horizon League Academic Honor Roll to celebrate achievements in the classroom.

“I wanted to try my best and really apply myself academically,” said Bent. “Over the past couple of years, I think it has helped me become much more confident on and off the pitch.

“In many classes you have to speak in crowds and do presentations, so you are able to transfer that confidence into your football, whether that is speaking to the team or doing interviews. Majoring in Organizational Leadership will allow me to hopefully pursue a career in coaching.

“If I had any advice for the current apprentices, I would recommend the need to be open-minded in every situation. Be your own person and don’t do something because others wouldn’t.

“Be the best person you can be on and off the pitch as you never know who you might meet or bump into. Don’t feel that because things did not turn out how you wanted to, that it is the end. It is just the beginning. There are so many ways to still play and enjoy the game more than ever.”