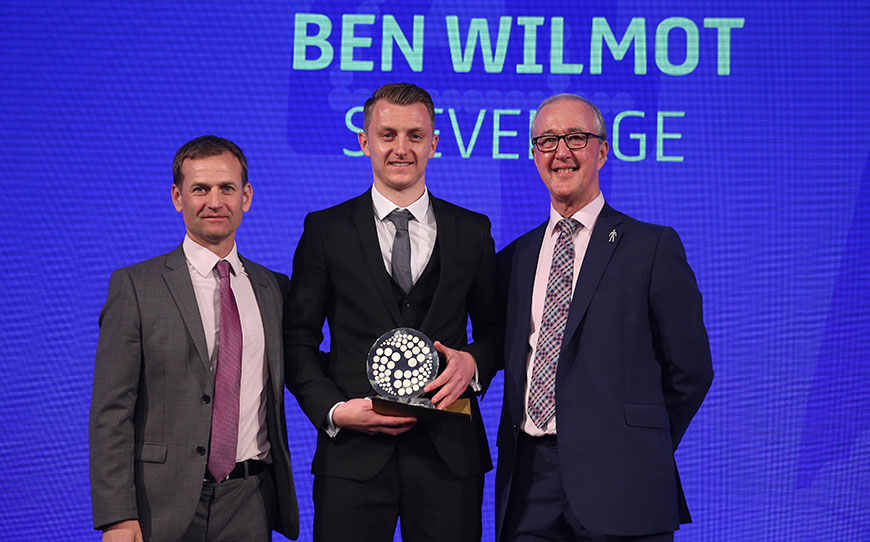 It is not often a League Two apprentice becomes one of the most sought after teenagers in the country, but Stevenage defender Ben Wilmot is certainly an exception to the norm.

The 18-year-old has enjoyed an exceptional 12 months, starting with the signature of his first professional contract this time last year. A senior debut in the Checkatrade Trophy followed before Wilmot was named in LFE’s ‘The 11’ in October, which celebrates outstanding performance on and off the pitch.

Stevenage Head of Coaching Stephen Payne hailed the second-year apprentice’s attitude towards all facets of the apprenticeship, with his footballing exploits coming alongside tremendous success academically, achieving high grades on the NVQ Level 3 Diploma and BTEC Level 3 in Sport (Performance and Excellence).

“Ben has demonstrated the same maturity and composure in all his performances, whether that be in a classroom, on a football pitch, in a training ground,” he said. “Naturally, that’s led to him being a regular for the first-team as an Under-18, which is unheard of for most in League Two.

“When people talk about Ben Wilmot, they don’t talk about a boy, they talk about a young man. He’s just taken on hurdle after hurdle and just effortlessly seems to be bounding over them.”

The teenage starlet earned two more outings in 2017 and has established himself as a regular in the first-team since the turn of the year, making his Sky Bet League Two bow against Morecambe a week after contributing to a clean sheet in the FA Cup third round against Sky Bet Championship outfit Reading.

Wilmot has featured 15 times in total, attracting the attention of numerous top-flight clubs, with Stevenage reportedly demanding a seven-figure sum to prise him away from Broadhall Way.

The highly-rated defender said: “Playing at centre-half, I come up against the big No.9 who doesn’t care how old you are and who will do anything to score a goal, so you’ve got to make sure you can hold yourself and hold your own in this league.

“I’ve been given the opportunity and I’ve got to make sure now that I stay in. Enjoying it as much as I am, I don’t want to lose my position.”

Wilmot also received international recognition with a call-up to the England Under-19s squad in March, appearing as a late substitute against Latvia before playing the full 90 minutes of a 2-0 defeat to Macedonia.

He added: “My call-up for the England Under-19s was unbelievable and it was the first time I’d played international football, so it was a real honour to play for my country and hopefully I get the opportunity to do that again.

“It’s a target of mine to keep playing for England because it’s the biggest honour you can have. I want to play at all levels, including seniors, so if I keep working hard I’ll see where it takes me.”

Wilmot saw off the challenge of strikers George Lloyd (Cheltenham Town) and Jordan Ponticelli (Coventry City) to claim the prize.