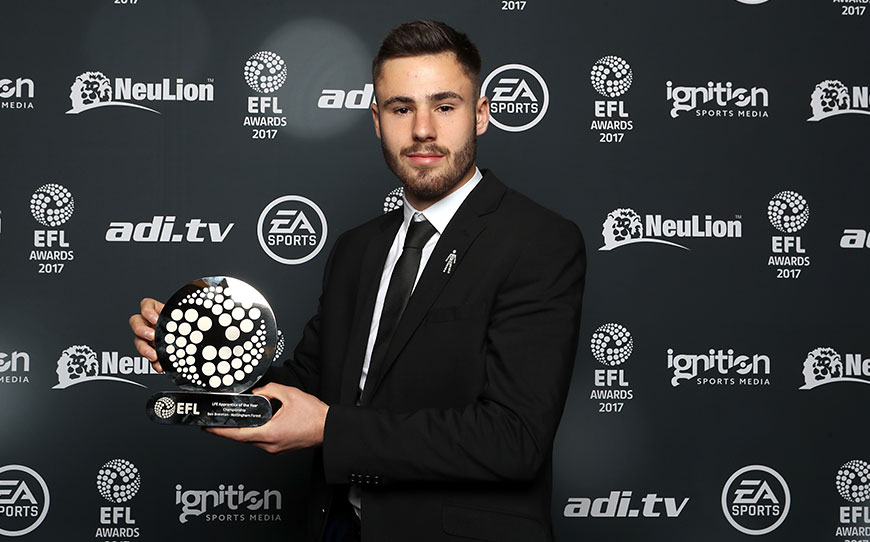 Nottingham Forest forward Ben Brereton has admitted that this season has surpassed all expectations, after being crowned the LFE Championship Apprentice of the Year, at the EFL Awards on Sunday evening.

It has been quite a campaign for the striker from Stoke-on-Trent who is one of a number of academy graduates now making an impact on first team affairs at the City Ground.

The 17-year-old only made his Reds first team bow in January but it did not take him long to hit the headlines, scoring a 90th minute winner against Aston Villa less than a fortnight later. By early April he had registered 3 goals from thirteen first team outings and started five consecutive games for Forest.

The development of his all-round game and moments like his assist for Eric Lichaj, to open the scoring in Forest’s victory against promotion hopefuls Huddersfield last weekend, has earned the admiration of new Reds manager Mark Warburton and attracted interest from Premier League clubs, with Arsenal and Liverpool, reported to be monitoring his progress.

“What a performance that was,” Warburton enthused.

“He had maturity, quality, desire, awareness and commitment.

“In my opinion, he can go to the very highest level. With his quality, his awareness – the cross he hit for Jamie Ward just before half time was a world class delivery. It was hit with pace and accuracy. It was outstanding. He will only get better.”

“It’s a great achievement for me and it just tops off a great year,” Brereton said.

“Last season I was in the Under-18s and then I came into the Under-23s. I just keep working hard and doing everything right, that’s what you’ve got to do and then hopefully you get picked for the first-team. When you get there you’ve got to take your opportunity.

“Now I’m in the first-team I can’t dwell on that, I have to keep pushing forward. Personally, I didn’t think I was going to do as well as I have done, but it’s been good. It just shows that if you work hard, then you can get there.”

His journey is unlikely to end with this accolade though, stressed the club’s academy manager Gary Brazil, who promoted Brereton to the senior side when he was placed in temporary charge of first team matters.

“We’ve been really impressed by the boy, as a human being, to start with,” Brazil said.

“We’re quietly surprised and pleased by what we’ve got out of him in 20 months. He’s adapted very, very quickly; he’s become very liked by his colleagues and his peers. Really, because he’s completely committed to the team.”

“The boy has a massive future going forward. Will he go on and do big things? Absolutely.”

Brereton however has remained modest about his rapid advancement and preferred to lavish praise on those that have supported him including; Brazil, Under-23s head coach Jack Lester, Under-18s boss Gareth Holmes and Under-18s assistant Jake Wigley.

“I owe the club a lot,” said Brereton. “They are a great club and the academy staff, like Jack, Gary, Gareth, Jake Wigley, they all supported me when I was in there. And they’re still supporting me now.