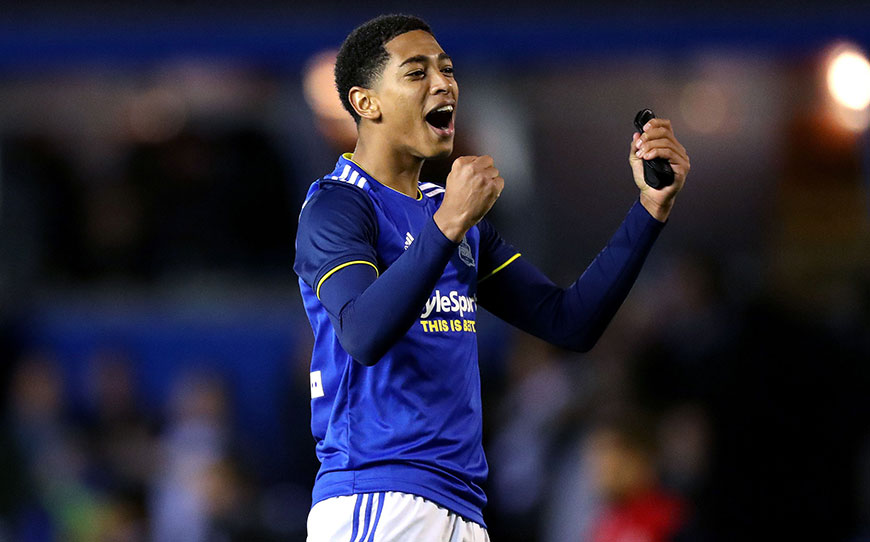 At just 16 years of age, Jude Bellingham has already etched his name into the Birmingham City history books.

The beginning of August saw the rising star become the club’s youngest ever player when making his senior bow in the Carabao Cup against Portsmouth, breaking a record that had previously been held for 49 years by Blues legend Trevor Francis.

By the end of the month, he added another to his tally after scoring the winner on his home debut against Stoke City to claim the youngest goal scorer crown.

However, Bellingham is determined to leave a lasting legacy that stretches beyond football, through his involvement with charity organisation The Mustard Seed Project.

“It’s something I’m really passionate about,” he told LFE. “Some friends of the family have set up a charity that helps students in Kenya. It’s not a very wealthy country and a lot of people go into a school without good facilities.

“It’s important to me to help that kind of community when I can. I’m trying to raise money and awareness through social media, which I think is something that I’m obliged to do being in the position that I am.

“I’m really eager to get out there at some point as well to see what I can do directly to help. I want to be remembered, not just for football but for my actions off the pitch. The only way I can do that is by carrying on doing what I’ve started to set in motion.”

For added context, Bellingham is not even old enough to feature in EA Sports’ FIFA 20. And yet, using his following of almost 40,000 people across Twitter and Instagram, as well as his connection with Adidas, the highly-rated midfielder is well on his way to reinvigorating the disadvantaged area.

“The ultimate aim is to make as much positive impact as I can,” he added. “The project currently is to build as many classrooms as possible and I think as I grow, the charity will grow as well.

“The more attention I get from doing good things on the pitch, hopefully that will crossover to the charity, so it’s definitely at the back of my mind as a driving factor for me to keep working hard and performing well so that the charity can benefit too.

“The fundraiser is still not at the target that I’d like to hit, but we recently sent some kit out for the football team. I saw a picture and it gave me a great feeling seeing how happy they were and knowing how much it will help them going forward.

“From an off the pitch point of view, it’s one of the best things I think I can do, so I’m just really excited to continue with that work.” Bellingham’s commitment to developing himself away from football has also extended into his education, with the teenage prospect making it a priority to quickly settle on a formula to incorporate his studies into his busy timetable.

“I understand the importance of education and how much my parents want me to have it nailed on,” he said. “I’m very concentrated when it comes to the classes and getting all my work done.

“Mark Sinclair – Head of Education & Welfare at the club – has been amazing with me in creating a schedule, making sure everything is planned perfectly so that I can do my BTEC with the rest of the boys.

“I train more or less every day and then on a Tuesday and Thursday after training I join the boys for a two-and-a-half-hour session, as well as doing part of my sociology A-level for two hours afterwards.

“It keeps me occupied on those days, so I’m not just sat at home playing video games. I get to participate in another activity that keeps my mind fresh and keeps me thinking about new things that are also relevant to football.”

The England youth international believes that his academic work is not just helping him prepare for the future, but also providing an opportunity to develop transferable skills that improve him as a player.

Bellingham continued: “It can give you a lot of qualities that you can take into a professional environment. I’ve learned from the first-team games that I’ve played that you must be switched on at all times and education develops my concentration.

“College is also a great chance for me to see the rest of the boys as I’m not in the changing room with them anymore. Most of the lads are older than me, but I’d like to think I’m setting a good example and being a good role model by balancing football and education.

“That gives me good leadership skills as I’m someone that people look at in the classroom to stay focused and on with the task and I can carry that onto the pitch. On quite a few occasions I’ve been given the honour to captain England, so all this stuff is helping me gain valuable skills.

“Everyone at my age should enjoy learning. Football is enjoyable but it only covers a short amount of your time and there are many hours to fill, so it’s important to make the most of that time and make sure you keep developing your brain.” Another aspect to Bellingham’s academic schedule is LFE’s Life Skills programme, which has so far seen the Birmingham apprentices attend sexual and mental health workshops.

He said: “They’re a good alternative to normal college because the sessions teach us more than just what’s on the curriculum. They give us knowledge about the real world and life skills that we can obtain.

“It’s great that we’re exposed to these topics at a young age. You see the number of males that have chosen to go down the path of suicide and we are in a pressurised environment, so to be educated about that at an early age is great.

“It increases awareness, not just for ourselves but also when looking out for others around us. You never know what people are truly feeling but it’s good to receive that information about spotting signs and how to help.”

Despite being in the early stages of his first year as an apprentice, Bellingham is already eyeing more memorable performances in his pursuit to cement a regular position in Pep Clotet’s starting line-up.

“Making my debut and then scoring to become the youngest player and scorer was a real honour because of who set the record,” Bellingham said. “I’m determined not to let the fans down and prove that I’m ready.

“Many other boys I play with for England don’t get many opportunities to play for their clubs and possibly won’t for another few years, so I’m really grateful that the manager and the staff have given me the chance to play at what I think is a huge club. I just want to keep improving, try to break as many records as possible and be as successful as I can for Birmingham City.

I want to keep maturing as a person and try to help people wherever possible, whether that’s with the charity or just being a mentor to others closer to home.”

His breakout start to the campaign has not gone unnoticed by stars of other industries, too, with grime artist Jaykae being particularly influential in offering guidance to the youngster.

“It’s a bit surreal,” he admitted. “They don’t have to take the time to pay me any attention but the fact that they’ve decided to say some nice things is amazing, so I’m really grateful for that.

“You could say that they’re under similar pressure to what I am, in terms of having to be good at what they do, so being able to get advice from them is key. I use that just as much as what I might use information from my coach or my parents.

“Jaykae is someone that I’ve exchanged messages with a lot and is someone that’s really supportive. He’s a big Blues fan and it’s really good speaking to him and seeing how much it means to him.

“I get quite a few messages from fans as well, saying that I’m a role model. It’s still quite hard to believe for me because I have my own role models that are in the first team that I’m now playing with. To be called one for other people is obviously an honour and hopefully I can keep inspiring others.”