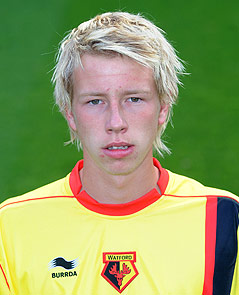 Congratulations go to Adam Thompson of Watford FC as September 2010 Apprentice of the Month.

Now in his 2nd year, Adam has shown excellent qualities on and off the pitch throughout his Apprenticeship.

The young defender has regularly trained with Watford’s first team squad making his debut against Notts County in the Carling Cup in August.

Adam has gone on to represent Northern Ireland at U19 and U21 level against Iceland, Germany and San Marino in September.

He is on target to complete the full ASE framework next summer and is working towards a double distinction in his BTEC.

Adam has also put himself forward to be a student mentor at the Harefield Academy and will work with Year 7 students.

Adam in action against Notts County