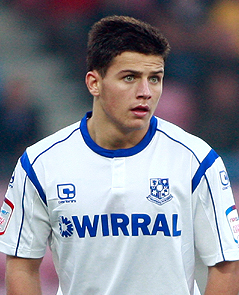 Congratulations go to Dale Jennings of Tranmere Rovers as October 2010 Apprentice of the Month.

Throughout his Apprenticeship Dale has shown a great development both as a footballer and person.

For the last two months Dale has been involved in the first team, making eleven appearances and scoring four goals to date. Technically he has shown that all his attributes allow him to compete at first team level without looking out of his depth and his understanding of his role in the team has been first class.

The progress he has made has allowed Tranmere to offer him professional terms which he has signed keeping him at Prenton Park for another two years.

During his time at the Club, Dale has shown maturity and management skills and has addressed the issues that were highlighted in his long term goals.

Dale has completed his first diploma to a merit grade and has now moved on to the award and is working really well and producing good quality work. He has also passed both key skills.

This is a fantastic achievement as he came on to the programme without any GCSE’s, few IT skills and showed little confidence in his ability to complete any formal education programme. He has worked really hard and achieved a lot and his IT ability is growing in strength.