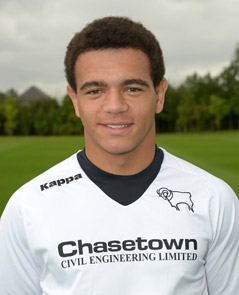 Derby County’s Mason Bennett has been named as LFE’s Apprentice of the Month for January 2013 after making excellent progress on and off the pitch.

Regularly involved with the first team squad, Bennett made a memorable start to the New Year becoming Derby’s youngest-ever scorer at 16 years and 174 days when he added the final goal in the Rams 5-0 FA Cup third round win over Tranmere.

He now holds two records at the club as he was already the youngest-ever player to appear for Derby’s first-team aged 15 years and 99 days old on his debut against Middlesbrough in October 2011.

“He’s doing well in training and coming along nicely in terms of his development,” said Manager Nigel Clough.

Bennett’s progression has not just been restricted to the pitch. In the classroom he is currently on target to pass his BTEC Diploma in Sport, NVQ and Level 2 Coaching Award, a fact not lost on ex Derby defender and LFE Regional Officer John Barton.

“It would be easy for someone like Mason to not be totally committed to his education programme, but he’s very positive about what he wants to achieve,” said Barton.

“He’s a very determined lad and I’ve been impressed to see him focus and catch up on his college work after he’s been away with the first-team or on international duty.”

Derby County Academy Manger Darren Wassall, added: “We are very proud of Mason`s achievements and realise that the demands of first team involvement, international duty as well as youth team appearances place a huge strain on an individual.”

“He has managed this whole journey superbly and has maintained his high academic standards throughout. He is an excellent young ambassador for this football club.”