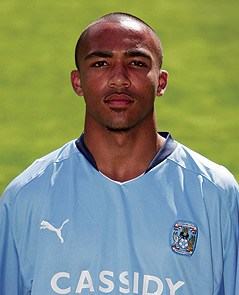 Congratulations go to Callum Wilson of Coventry City as January 2010 Apprentice of the Month.

A very keen, enthusiastic and reliable player, Callum has overcome two injuries during his time with the Club yet his progress has not been held back.

In his first year as an Apprentice the striker dislocated his shoulder in a game against Portsmouth’s Academy and rehabilitation meant he was away from the game for six months.

However, his physiotherapist was delighted with his dedication to the task and he returned to the fray in late March 2009, playing up front, leading the line well and scoring goals for the Sky Blues Youth squad.

In August 2009, he made his first team debut against Hartlepool United in the League Cup but in early October 2009 a second stroke of bad luck against Portsmouth in another Academy game forced Callum out for six weeks with a broken ankle bone, and more rehab followed.

Fortunately he made great strides in both his education and football development and at the moment he is playing very well and back in first team contention.

Callum was the first of Coventry’s Apprentices to complete his NVQ in September 2009 with impressive work and is on target to complete the BTEC with merit profile. He is also delivering practical coaching sessions at his old secondary school towards the Coaching certificate.

Callum is highly regarded at the Club and his determination to succeed in whatever he does is evident in all aspects of the Apprenticeship.