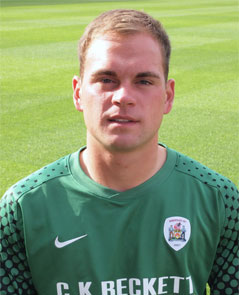 Lucas Lidakevicius of Barnsley has been named as LFE’s Apprentice of the Month for February 2012.

Lucas has excelled on the football pitch this season, putting together a string of impressive performances for the Youth and Reserve teams which have resulted in him travelling with the First Team on a number of occasions.

His efforts in training have also seen him improve his all round game. In his position as goalkeeper, Lucas has represented his country at both Under 18 and Under 19 levels.

With English being Lucas’ third language he understandably had a few difficulties when he first arrived at Barnsley.

A Lithuanian National, not only does Lucas speak his native dialect but he is also fluent in Russian.

Nevertheless he has remained committed to his apprenticeship and to date has completed his NVQ, both Key Skills and his Coaching Award whilst also being just two units away from completing his Level 3 Diploma in Sport.

Alongside this, Lucas is working towards his Leaving Certificate in his homeland via distance learning. This will afford him the opportunity of returning to his roots to further his education at University should he decide not to remain in the UK on completion of his Apprenticeship.

The Red’s Education and Welfare Officer, Tony Warden is full of praise for the young Lithuanian:

“Lucas never ceases to amaze. His work ethic is much to be admired, because in addition to completing the Apprenticeship in Sporting Excellence, he is continuing his Education in Lithuania on distance learning programmes!”

“He has to be an expert in time management – and he is not a bad goalkeeper either! Perhaps Lukas’s major obstacle was settling in South Yorkshire and getting to grips with the Barnsley accent, but he is now fluent in that too!”