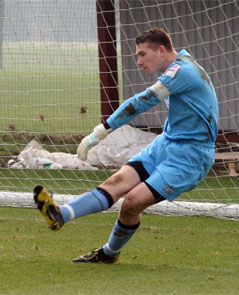 Notts County’s Fabian Spiess has been named as LFE’s Apprentice of the Month for April 2012.

Fabian has consistently demonstrated a very mature attitude towards his education, having completed his NVQ and Coaching qualifications whilst also working to a triple distinction grade on the Extended Diploma.

His efforts in the classroom this year have also seen him shortlisted for Student of the Year Award at South Notts College.

Throughout his Apprenticeship Fabian has been a role model to his peers and has worked diligently towards completion of his educational programme, whilst also maintaining his football development in the first team environment.

He was rewarded with a professional contract earlier in the season and gained valuable first team experience during loan spells with both Lewes and Corby Town.

Fabian later went on to make his Magpies debut coming on as a substitute in the final day victory against Colchester. His talents have not gone unnoticed and he has been linked with a string of big name Clubs over the past year.

“I strongly recommend Fabian for this award. He has been a model Apprentice and a pleasure to deal with for the duration of his Apprenticeship.”