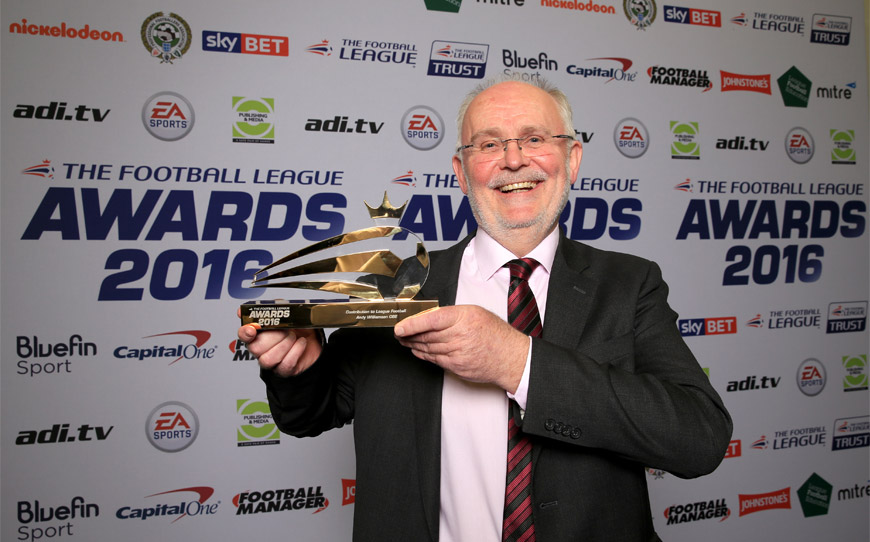 Andy Williamson OBE has been awarded the prestigious Contribution to League Football award at The Football League Awards 2016.

Williamson, who will retire at the end of this season, was rewarded for 45 years of unbroken service to The Football League and its clubs. His career at The Football League began in 1971, when at the age of 17, he joined the Player Administration Department. The Yorkshireman went on to serve virtually every department within the organisation.

Now 61, Williamson who played a key role in the formation of LFE and is a current Trustee of the organisation, is widely acclaimed across football for his firm but even-handed management of club issues and his commitment to fair competition between clubs.

During his career he has been personally involved in many of league football’s defining moments including the introduction of three points for a win (1981), the League’s first title sponsorship (1983) and the introduction of the Play-Offs (1986) – the finals of which moved to Wembley in 1990 at his personal instigation. In 2012, he was awarded the OBE in recognition of his outstanding contribution to football.

Recognised with an OBE in 2012, Williamson has also provided leadership to The League and its member clubs in challenging circumstances, such as the Bradford fire (1985), the Hillsborough disaster (1989), the formation of the Premier League (1992) and the collapse of ITV Digital (2002).

The latter saw Williamson devise a comprehensive overhaul of The League’s financial governance programme that included the introduction of Sporting Sanctions (points deductions for clubs going into administration), the publication of club spending on agents’ fees, football’s first ‘Fit and Proper Persons’ test, the first limits on club expenditure on players’ wages relative to income, and sanctions for clubs that fail to meet their tax liabilities.

Williamson also provided the leadership and drive behind The League’s successful youth development programme over many seasons – a programme that has helped to develop some of the country’s brightest footballing talents.

The Football League devotee received the award at the gala ceremony at Manchester Central on Sunday evening in front of more than 600 guests from clubs, sponsors and the football industry.

“Andy Williamson’s wisdom and exceptional judgement has earned the admiration and respect of the football world across the last five decades.”

“In his lifetime of service to The League he has pioneered changes both on and off the pitch, which have helped define English football. We wholeheartedly thank him for everything he has done.”