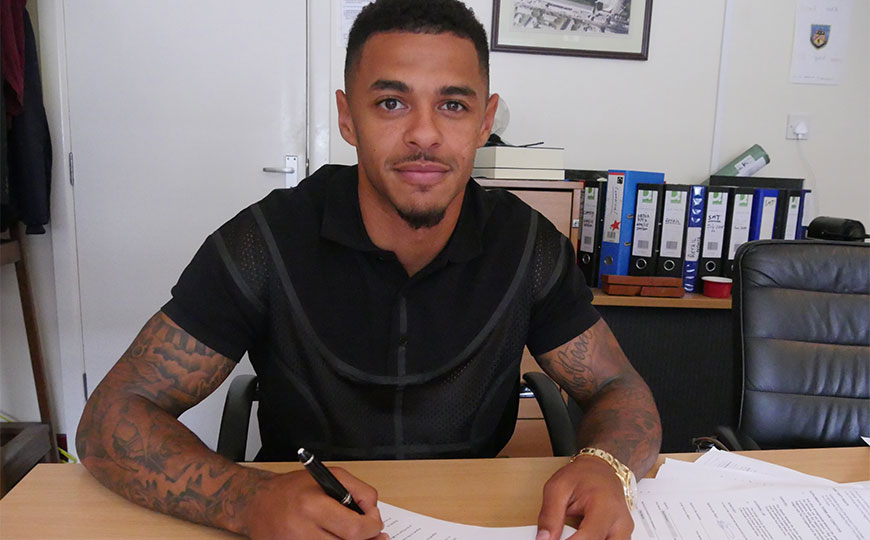 While the John Stones transfer tug of war rages on, another former apprentice has already made one of the biggest moves of this summer in the Championship, Andre Gray.

The 24-year-old recently became Burnley’s club-record signing after joining from Brentford in a deal that is reportedly worth around £6million up front and a further £3million in add-ons.

It has however not been short or entirely smooth road back towards the top for Gray. Released by Shrewsbury after a year as a professional the player drifted in to the non league game.

“Andre is a player who we have been aware of since his Hinckley Town days in non-league,” said Clarets boss Sean Dyche.

“He has worked very, very hard to get to the level he’s at. He has risen up the ladder and, in many ways, had a similar pathway to two former strikers here – Danny Ings and Charlie Austin.

“In that respect there is a rawness, a hunger and a great desire from him to continue his education and go even further, and we intend that to be with us in the immediacy and also in the future.”

However, the striker was limited to just five substitute appearances and after loan spells with non-league Telford and Hinckley, Gray made a permanent switch to Hinckley.

“I was at the stage in my life where I thought everything was set for me. I didn’t really care about playing in Shrewsbury’s reserves which it shouldn’t have been,” he told The Non-League Football Paper.

“To come out of full-time football and go part-time made my mind up. I’m glad I got that set-back so young because now I know that’s not where I want to end up again. Ever.”

He added: “Everyone’s got a dream, mine is to play as high as I can. The only thing that stops people is what is in their head. Playing Non-League gives you that drive.”

Having fallen out of professional football, 37 goals in 85 appearances for the Conference North side coupled with impressive displays against Luton in the FA Trophy persuaded the Hatters to make a £30,000 investment.

Gray continued his prolific form, scoring 30 goals in 44 league appearances in his second season with the club to spearhead the team to the Conference Premier title.

Hatters chief executive Gary Sweet told the club website: “Everyone at the club takes huge pride in seeing players who have developed with us blossom in their careers.

“We’re absolutely thrilled for Andre in this case – he’s a very honest, ambitious and hard-working player who deserves every success.”

Gray only further enhanced his reputation following his £500,000 move to the Bees, netting 17 league goals in their stunning run to the play-offs last term.

Having scored in both of Brentford’s opening fixtures this season, the Clarets came calling and beat Bristol City to his signature.

And the new signing is likely to make his debut at Ashton Gate tomorrow.

“It’s Sod’s Law that we played Brentford the day after I signed and then we’ve got Bristol,” he said.

“I’ve got a lot of work to do. I’ve only had one season in the Championship and I’m still very raw and I’ve still got a lot to work on.”

The man who nearly saw his professional career slip away just five years ago has set himself lofty expectations.

“I believe I can be a Premier League player. If I made the step up the leagues I can’t see why not.”

“I’ve come this far and I’ve gone past having to pinch myself.”

Here are a selection of images from Gray’s journey to prominence: