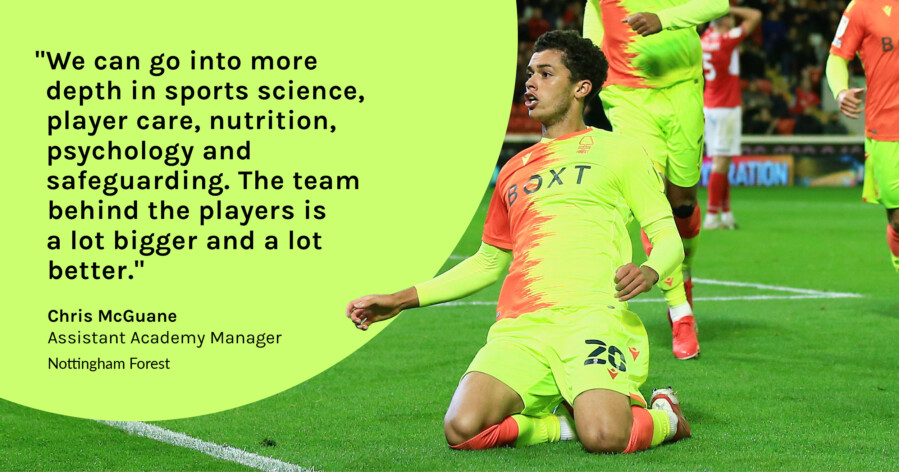 It is November 12, 2021, and striker Dale Taylor is about to add to Nottingham Forest’s rich history of nurturing top young talent.

After impressing for Warren Joyce’s Under-18s and Andy Reid’s Under-23s in the early stages of the 2021/22 campaign, the second-year apprentice is mentally preparing himself for the biggest moment of his career so far.

In a few seconds, the 17-year-old will tap the hand of Josh Magennis and run onto the field to make his international debut for Northern Ireland.

“I was a bit scared, to be honest. I had goosebumps when I was told to get stripped,” Taylor reminisces.

“As I was waiting to go on, the atmosphere blew up, which made it easier for me because the adrenaline just took over.”

That appearance against Lithuania made him the 12th youngest player to feature for Northern Ireland and his ‘fearless’ display, to quote manager Ian Baraclough, drew praise from fans and pundits alike.

“There are not too many words to describe it,” the striker adds. “It is by far the best thing that has ever happened to me. Hopefully, my Forest debut is next.”

The teenager’s meteoric rise onto the international stage underpins the talent that sits within the Forest ranks – players capable of performing on the biggest of stages, with the characteristics to thrive in high-pressure moments, or when called upon by first-team boss Steve Cooper.

And while Taylor’s achievements will be used as an example by academy coaches for years to come, the youngsters don’t have to look too far for other sources of inspiration, as graduate Brennan Johnson continues to light up the Championship after earning his chance. Not to mention Joe Worrall, Ryan Yates and Alex Mighten, who between them have racked up over 300 appearances since they progressed through The Reds’ academy.

The quartet embodies the trust that owner Evangelos Marinakis is placing in the youth system, which, blended with experience, is proving a fruitful recipe during their drive for promotion.

Brass is an ex-professional footballer and manager, who joined the club’s recruitment department last summer. “You can go back as far as Jermaine Jenas, Karl Darlow, Jamaal Lascelles, who have all gone on,” he adds.

“A fantastic statistic for us is that in the last seven years the club has averaged three academy players making their first-team debuts per year. That is a phenomenal achievement in the world of youth football. The challenge is to build on that now.”

It is not just down to potluck, either. The Reds have a very specific set of characteristics that they look for when recruiting and developing young players. As Brass scours the country for potential signings, Head of Coaching and Player Development Jody Caudwell is tasked with ensuring those traits are already present within the academy:

“From a player development perspective, we have always had a strong programme, which has been heavily based around our academy traits. There are certain values and behaviours that we want to see,” Caudwell says.

“We have a holistic educational football programme that runs from pre-academy to the Under-23s. Within that we have certain player types, for example, Arvin Appiah was an exciting player and a good dribbler, and now we have Brennan Johnson and Alex Mighten who fit into that profile. Dale [Taylor] is an incredibly talented player who was brought into the programme as a scholar last year, and he fits into our finisher profile.”

Since its inception in 1997, the academy has produced a steady and rather impressive production line of players, many of which have gone on to enjoy careers in the Premier League. But for all those successes, the youth academy has never been in a better position than it is today, having achieved Category One status in May 2021.

The step up has marked the dawn of a new beginning. Thanks to the unrelenting hard work of Gary Brazil – who, for over a decade, has put his time, wisdom and effort into establishing the academy – along with the investment of Mr Marinakis, the club now has access to youth grant funding and its youngsters compete against better quality opposition in their game programmes. The academy’s staffing structure has also been enhanced to provide a more comprehensive support network for each player.

There are even plans to redevelop and modernise the Nigel Doughty training facility, which has been the club’s training base for over 20 years. But while all of this sounds rather rosy, getting to this point was no mean feat. The extensive audit conducted by the Professional Game Academy Audit Company consists of a full, detailed review of evidence and documentation. For Assistant Academy Manager Chris McGuane, getting the seal of approval was a reward for all the hard work that went into it.

“It was great for everyone connected to the football club, from the owner down to all of the staff. We have some excellent people behind the scenes who invest in the programme and the players,” McGuane tells LFE.

“The audit has been a real in-depth process, but it allowed us to shine a light on how good we are as an academy and the positive elements of what we do to the auditors and the Professional Game Board.

“Moving to Category One status has always been a vision of the football club and the owner. We decided that it was the right time for us as a football club to go through the application process.

“I was just really pleased for the academy staff who put in a lot of hard work that goes relatively unnoticed. We all know that it is unsociable hours – evenings until nine or ten o’clock at night and weekends when friends and family will be socialising. It was a reward for their efforts.”

To offer some context as to how far Forest’s academy has progressed, ten years ago it had just seven full-time members of staff. Today, there are over 100 employees, with almost 50 of those working full-time.

“It has been a massive increase,” McGuane explains. “It highlights just how much the programmes have grown over the last decade and, equally, how much extra support is given to young players. You can now put a multi-disciplinary team around each individual, rather than spreading yourselves out around 160-170 players.

“We can go into more depth in sports science, player care, nutrition, psychology and safeguarding. The team behind the players is a lot bigger and a lot better.”

Education is another department that The Reds pay close attention to. Having formed a link with Loughborough College in recent years, the standard of the apprenticeship programme has been boosted.

“We want everyone to come out of the programme with the best possible grades to open up that next step, should they need to fall back on them,” says Head of Education Chris Caunt.

“When I arrived here, the first thing I did was take a close look at the existing education programme and evaluate what was going well and what wasn’t going so well. From there we started to implement some changes, with the key focus being to raise the standards and make sure the apprentices are coming out of my element of the programme equipped for whatever is next.

“Previously, there was a mentality of ‘just get the boys through and complete the programme’, but there is a new culture now where standards are high and there is an expectation to hit targets.”

Alongside the traditional BTEC Diploma, Functional Skills, and Certificate in Coaching, LFE introduced the Sporting Excellence Professional (SEP) apprenticeship two years ago. Nottingham Forest was one of six clubs invited onto the pilot programme ahead of its introduction to all member clubs. Since then, overseen by LFE Regional Officer Ian Tombs, former schoolteacher Caunt and SEP Coordinator Matt Sinclair, it has been a huge success.

While Caunt lauded the efforts of Sinclair, it has also been the interest shown by the club’s hierarchy that has driven things forward:

“We are extremely fortunate to have an owner and a leadership team that is supportive of education. The new CEO recently asked me about a player who will potentially play for the Under-23s or first team soon, and he was very keen to see how we can structure his education to make sure he doesn’t miss out. To have that buy-in from a person at the very top of the football club is pleasing.”

As they have done so often over the years, the former European Cup winners are setting the benchmark for youth development in this country, from academic success to first-team debuts. But the question that some may pose is whether the considerable investment in a Category One academy can help them get back to the promised land of the Premier League.

“Most of us have been here for a very small piece of Nottingham Forest’s history. There were foundations put in place during a period of great success, which over previous regimes were lost,” Brass confesses.

“But having been around the game a little bit, I know that there is something special here. Using what we call the ‘Forest way’, there is a collective belief that those foundations will find their way again.”

This article features in Issue 43 of LFE’s Touchline magazine