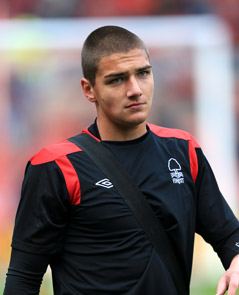 Nottingham Forest’s Dimitar Evtimov has been named the LFE Apprentice of the Year for the Championship at the Football League Awards 2013.

Forest’s Education Officer, Dennis Judson, received the award on Dimitar’s behalf at the gala ceremony at The Brewery, London, on Sunday evening in front of over 600 guests from clubs, sponsors and the football industry.

Since his arrival in England, Dimitar has impressed his club academy, community staff and those from outside the club with his positive attitude and likeable personality.

During his time at Forest, Dimitar has progressed both on and off the pitch; following two non-league loan spells and time in the youth team he is now the club’s number two goalkeeper and has represented Bulgaria at Under-19 and 21 levels. Dimitar is also heavily involved with work the community and offers regular support and visits to local Nottinghamshire schools.

“This will mean an awful lot to Dimitar, he has dedicated himself not only to football but to his education too and he is progressing well both on and off the pitch.”

“He is currently in Bulgaria with the under-21s but winning this will make him so proud.”

The LFE Apprentice of the Year for League One Award was won by Hartlepool United’s Luke James, while the League Two Award went to Barnet’s George Sykes.

To find out more about The Football League Awards, and for a full list of Award categories, please visit www.FLAwards.com