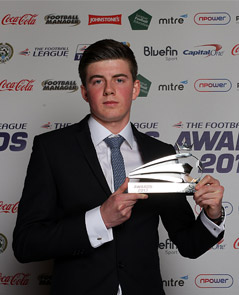 Barnet’s George Sykes has been named the LFE Apprentice of the Year for League Two at the Football League Awards 2013.

Sykes received the award at the gala ceremony at The Brewery, London, on Sunday evening. The 18-year-old beat two other shortlisted League Two players to the Award, Plymouth Argyle’s Tyler Harvey and Rochdale’s Jamie Allen.

Finishing top goal scorer in last’s season’s Football League Youth Alliance, George has also scored three goals in seven appearances for the Barnet Under-21 Development Squad as well as getting a call up for Scotland U19’s.

After signing a professional contract at the start of the 2012-13 season, George made his senior debut for the Bees in August 2012. As well as excelling on the pitch, his studies have always been important as an apprentice, and he has continually stayed ahead of target on all his subjects and portfolios.

On winning his award, Sykes said:

“I am really surprised, I didn’t expect when I started my scholarship that I would be getting something like this. It just shows if you work as hard as you can, you give yourself a chance.”

“I would like one day to play at the highest level possible but I am not getting ahead of myself.”