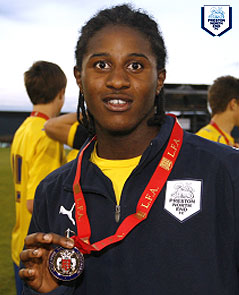 Brandon Zibaka has become Preston North End’s youngest ever player after coming on as substitute in the club’s 2-0 Carling Cup win at Charlton Athletic last night.

Zibaka who only left school in the summer, beat current youth-team mate Doyle Middleton’s record of 16 years and 122 days by 6 days.

Middleton made his debut in the same competition last season.

Zibaka, who hails from the same area of Manchester as Manchester City Assistant Manager Brian Kidd and former North End Boss Nobby Stiles, was quick to thank the club’s youth department for helping him advance so quickly.

“It’s unbelievable to get the opportunity so early on in my Apprenticeship,” he told the club’s website.

“I couldn’t have done it without the youth team players and staff though. I have tried hard in training and games and it has paid off.”

“It gave me a great chance to see what the first team is about and to play in a big stadium against professional players.”

“I did have a few texts off the other Apprentices wishing me luck and it just shows how together we are in the youth team. After the game they have all text me as well, including Jamie Hoyland and Dean Ramsdale, so I’m really happy.”

Zibaka is now keen to emulate a number of the club’s younger players who have already as he looks to push forward his claims for more first-team action.

“There are players like Doyle, Conor (McLaughlin), Jamie Proctor who have come through the system and they are players to look up to,” he added.

“Jamie did well for the youth team, started playing for the reserves and now he is playing regular first team football every single week, so I look up to people like them.”

“It’s very exciting. I hope to get the chance to play more games with the first team but I can’t get carried away.”

Meanwhile current North End Boss Phil Brown has admitted that if a player is good enough age will not be a barrier to any of the clubs budding youngsters being given a first-team opportunity.

“I was delighted to hand Brandon his first team debut tonight. He got the call up on merit! He played well for the youth team last Saturday against Blackpool and scored two goals.”

“Every member of the youth team coaching staff came to my office on Monday morning and said that the lad deserves a chance.”

“There are some bright futures at the Club and it is all about giving them the opportunity and that will be the case again next Wednesday.”