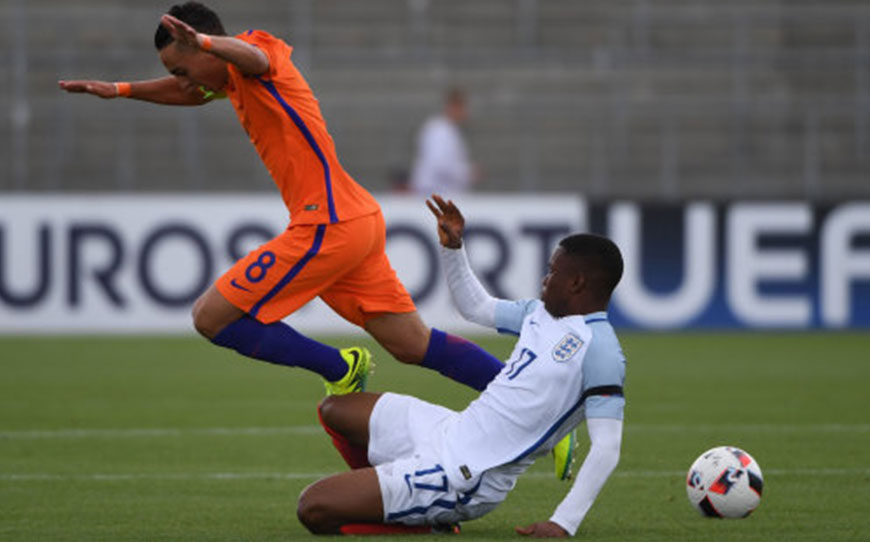 A few months after being crowned Championship Apprentice of the Year, Charlton winger Ademola Lookman was playing up a year for England Under-20s in their Four Nations tournament on home turf.

In the opening game England beat the Netherlands 2-0 at Oldham with EFL clubs represented:

Luke Southwood (Reading) was in goal, former Fulham product Patrick Roberts – now on loan at Celtic from Manchester City, Louis Reed (Sheffield United), Middlesbrough’s Harrison Chapman (on loan at Sheffield United) all started while Bournemouth midfielder Lewis Cook, the 2015 Apprentice of the Year at Leeds came off the bench.

Lookman equalised in England’s 3-1 win over Germany at Huddersfield, a game in which former LFE apprentices, Dael Fry and Chapman (both Middlesbrough), captain Taylor Moore (Bristol City), Callum Connolly (Coventry City) and Cook, all featured in.

They wrapped up the tournament with a 2-0 win over the USA at Rochdale thanks to two late goals. The American team contained Jurgen Klinsmann’s son Jonathan in goal.

Several LFE apprentices were in action for the Under-19s. Sheffield United goalkeeper Aaron Ramsdale, along with Fulham duo Adetayo Edun and Ryan Sessegnon, all started in the impressive 3-1 win over Croatia in Zagreb.

A few days later, an injury time goal saw them beat Bulgaria 2-1 at Wycombe, with former AFC Wimbledon apprentice Will Mannion coming on in goal at half-time, just weeks after joining Hull City.

Mannion replaced Middlesbrough custodian Aynsley Pears while Edun and Sessegnon came on after an hour.

In November, Keith Downing’s side kick off their qualifying campaign for next year’s Under-19 European Championship, facing hosts Wales in between games against Luxembourg and Greece.

England bounced back to win the second game 2-1 in Taby, Millwall goalkeeper Ryan Sandford played the whole game while Hirst and Dozzell came on as late substitutes as the Young Lions held on for victory.