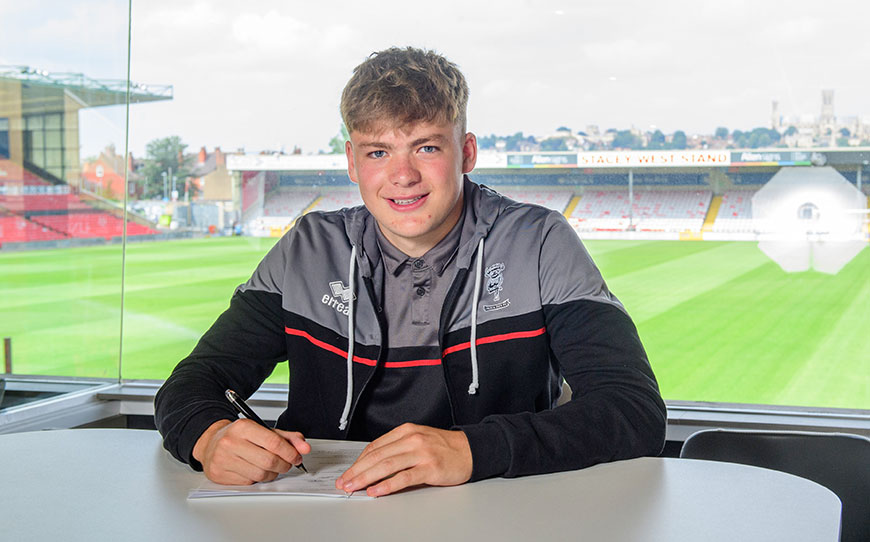 The talented forward was shortlisted for LFE’s Goal of the Month competition in March after scoring a spectacular strike in the fourth round of the FA Youth Cup against Watford.

Since then, Draper has impressed coaches having progressed into first-team training throughout pre-season, joining fellow academy players Hayden Cann and Jovon Makama, plus first-year professional Sam Long, as young homegrown professionals in the Imps squad.

“It is a dream come true,” he told the club website. “I’ve always imagined signing as a professional and I can’t wait to get started.

“It has been a tough but brilliant experience to be involved with the first-team. It has been good for me and hopefully I can keep that up throughout the season. I just want to get as many games under my belt this season and keep developing.

“I’ve developed as a player over the past year at the club, I’ve changed position to become a striker and adapted to play with my back to goal and score different types of goals.

“The academy staff have helped me develop and learn different aspects of my game, they’ve really helped me push on to where I am now.”

Director of football Jez George added: “Freddie is an extremely talented young player with top attributes and a top mentality. We have seen through his application every day since arriving at the club as a first-year scholar a year ago that he will maximise his potential and he has really responded over the last month to the challenge of training full-time with our first-team.

“The environment created by Michael (Appleton) could not be better for his ongoing development, but great credit also to all the academy staff for their work with Freddie over the past 12 months.

“I would also like to give a special mention to Professional Development Phase Lead Coach Ashley Foyle, who was so instrumental in us being able to recruit Freddie after he left Derby County 18 months ago.

“This is a brilliant and thoroughly well deserved day for Freddie and his family. We have great belief in him, as demonstrated by signing Freddie on the longest possible professional contract at the earliest possible moment, but he knows that it is just another step on the long path to what he wants to achieve.”