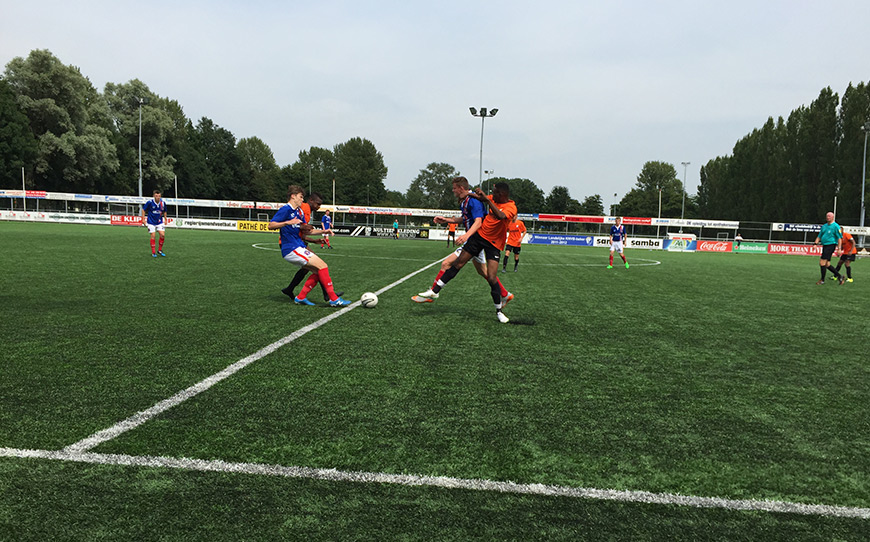 It has been a busy few days here in Gilze! Finally, I’ve got some time to return back to you everything that’s been ongoing through the end of the first week.

We’ve become very settled here and the schedule has started to become routine-like. We’re up the same time every morning, train roughly the same times every day and most importantly our food schedule is like clockwork!

We also enjoy relaxing in the pool facilities in the evening and we’ve really bonded as a team.

However, one thing that currently eludes us is controlling the bikes! You have to peddle backwards to brake and we’re jerking back and forth all over the place. And the worst thing is it’s normally me that the lads and coaches are laughing at – I just can’t seem to get the gist of it!

Thankfully, I’ve not flown over the handle bars just yet, and I’ve made it to training each day just about unscathed!

We played Millwall in a practice match and drew 1-1, which was a positive result. It was a very stern test as they are a fast and strong team, compared to our more technical style on the ball.

The game was very high tempo, with both sides producing good pieces of play. The match was 3×20 minutes, and having conceded in the second interval, we grabbed a last minute equaliser in the final interval. Scenes!

It was very enjoyable and beneficial for us to get some competitive practice ahead of our scheduled games.

Things heated up even further the following day when we had training sessions with an NAC Breda coach. It was great to learn about the Dutch philosophy and their love for the game.

We added some spice to afternoon training, where we had a 3v3 tournament. The winning team would get breakfast served to them in bed the next day, and thankfully I was on the winning side!

Before we knew it, match day was upon us. Arron Bradbury, Rhys Groves and I were served to our delicious breakfast in bed by our marvellous waiters Joe Breen, Ellis Pearson, Jack Egan and Morgan Bacon – a perfect start to the day!

We then headed to Rotterdam to face our Dutch opponents Leonidas U21s. On arrival, we caught the end of the Feyenoord vs Derby game, which was played at a very high standard. We all gained motivation from that to replicate their quality and work-rate.

However, that went out the window when we fell 2-0 down with ten minutes to go! But Jack Egan’s introduction changed the game, and within minutes he and Arron Bradbury had scored to get us level, followed by a Max Brown winner in stoppage time.

We showed a lot of character, as well as fitness, to overturn the deficit, but the space conceded in behind our midfield is certainly something to work on.

But the next day we woke up refreshed and in high spirits as we set off for Amsterdam. Having heard some strange things about the place, it was an interesting experience to know how some people earn a living, and how much of a weird place it is compared to Newcastle, our nearest big city at home!

We toured the giant Amsterdam Arena and then saw PSV beat FC Groningen 3-0 in the Johan Cruyff Shield. It was great to watch the Dutch masters of keep-ball in the flesh.

All-in-all, I’ve had a great first week in Holland and have gained an awful lot of experience, both on and off the pitch.

Very much looking forward to the remaining days!