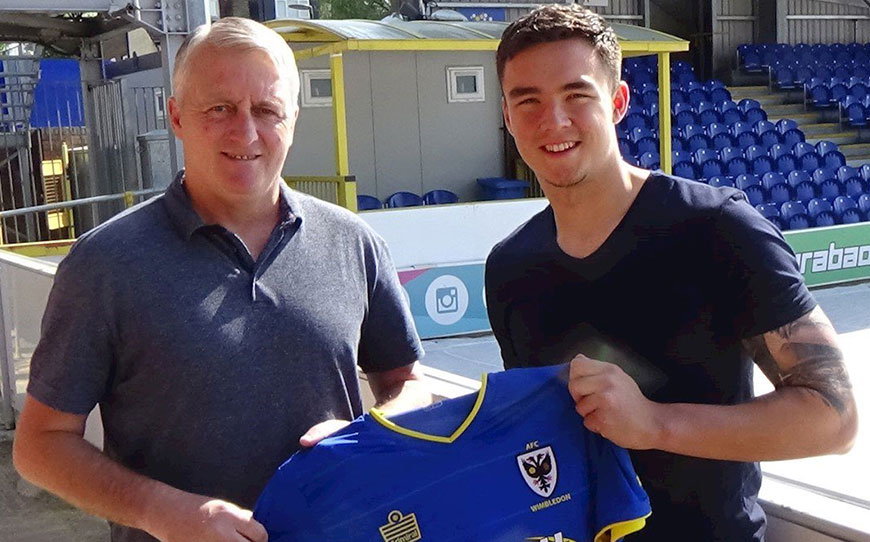 AFC Wimbledon have snapped up Burnley academy graduate Tommy Wood to add to Alan Reeves’ development squad for next season having impressed on trial towards the end of the campaign.

The 19-year-old was named Youth Team Player of the Season during his time with the Clarets and featured in LFE’s ‘The 11’ in June 2017 having achieved D*D*D on his Extended Diploma, in addition to impressive performances in the Under-18s and Under-23s.

Burnley activated the third year of his scholarship, but after a couple of loan spells this season, he was deemed surplus to requirements at Turf Moor and now embarks on a new challenge with the Sky League One Dons.

“Tommy played really well against Bournemouth and Plymouth,” Reeves told the club website. “He brings other players into play, he is strong, intelligent, and hard-working.

“I am looking forward to working with him. In the last 10 or 15 years academies have been producing numbers 10s, but now everyone is scrambling around looking for big number 9s. Tommy fits the bill. We are looking for a big number 9 for the first-team ideally as we’ve not been able to replace Tom Elliott since he left.

“Unless you are an out and out passing side, which we haven’t been, you are looking for a plan B. That plan B normally involves a target man when your backs are against the wall a little bit and you need a bit of a get-out ball. That’s why we’ve brought Tommy in, especially for the Under-23s.”

“I really liked the place, the boys were really welcoming, and I enjoyed working with the manager, Reevesy, and the staff. I’m a target man and a good outlet. I play for the team, I play off people, and bring other players into play. I’d like to think I can get a few goals too.

“I know that Wimbledon is a big club, up and coming, and it has a lot of history. Everybody knows the Wimbledon story and I’m glad to be a part of it. It’s nice to have a new challenge and a new chapter in my football career. I just have to crack on now, and make sure I am fit for pre-season.

“If I train hard and perform well, then who knows what can happen? Hopefully I can be knocking on the first-team door. It’s another challenge in my career and I’m really looking forward to it.”

Reeves said: “Kosta is technically a very good player. He does not give the ball away much and he showed a good attitude in training. He did not look out of place in first-team training, which is very important. Physically, he has things to work on, but he looks like a talented boy.

“Hopefully, Kosta will have that bit of hunger to do well after being allowed to leave Reading and he will hit the ground running when pre-season training starts.”