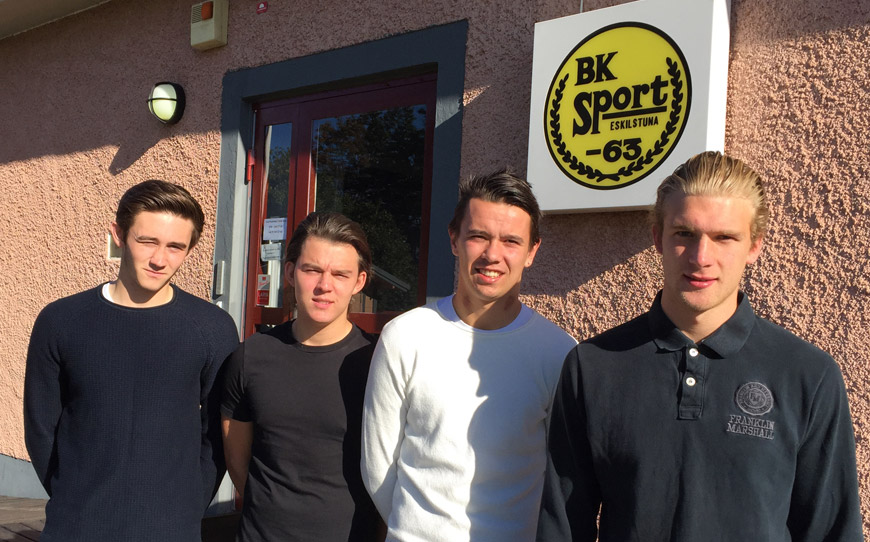 Gavin Willacy chronicles his recent trip to Sweden and explains how some former apprentices are embracing the Player Placement opportunity that LFE provides:

Being released at the end of your apprenticeship can be a devastating blow but a group of LFE apprentices took the opportunity to experience something totally different and have spent the last three months playing semi-professionally in Sweden.

Thanks to European Union funding via the Erasmus+ scheme, LFE are able to send 30 ex-apprentices to Sweden on 13 week placements each year, and with the Swedish season just coming to an end, the final placements finished in early October. My fellow Regional Officer Simon Williams and I went out to visit five of the players last week.

Winger Shola Oladipo only left Leyton Orient in May and instead of spending July doing pre-season trials around the London area, he was in Ornskoldsvik in the middle of Sweden, by the Baltic Sea! Shola spent three months playing for IF Gottne, a club based in a village about 20 minutes drive from Ornskoldsvik, itself an industrial town obsessed by ice hockey and their top flight club Modo.

Shola had a room near the estuary, where paper mills look out across the sea towards Finland. It is a far cry from home.

“It’s been weird staying here having spent most of my life in London,” says Oladipo.

“It’s very different from where I live in Brixton. I haven’t heard a police siren for three months! It’s been great although it’s too quiet here for me to live here permanently. I’ve got to know all the lads, and because we’ve had a couple of Serbians and two Kenyans here too, it’s been interesting mixing with them.”

Shola played a major role in keeping Gottne in the Third Division, playing in every game of the second half of the Swedish season. His performances on the wing helping them avoid the relegation play-off with victory in their final game.

An hour’s flight south and things were not so rosy. Four LFE apprentices spent the season with BK Sport, another third division club on the outskirts of Eskilstuna, a small city two hours’ west of Stockholm. Jordan Harper and Josh Barr-Rostron, both released by Lincoln City, former Dagenham & Redbridge left-back Lewis Clark, and ex Preston North End Harry Hagon couldn’t save BK from relegation back to the fifth tier, as they lost all but one of their games.

“It was tough as the team just didn’t seem to be strong enough for that division,” admitted striker Jordan, who was considered a success with the club. “I got a few goals but we were up against it in every game and the club as a whole seemed to realise we were in a division too high. It’s been fantastic though. We’ve seen a whole new lifestyle and it’s something we’ll never forget.”

All four lads lived together in the BK clubhouse and have enjoyed what Swedish life has to offer, training three times a week, playing at the weekend and settling into Eskilstuna. Josh and Jordan have also been busy coaching the Under-15s every week.

BK Sport have been on the programme for several years and were also home to former Barnet duo Ed O’Neill and Moses Duckrell, the latter signing for Scottish pro club Livingston on his return from Sweden this summer.

Gottne have also been long-term partners, with former Stevenage centre-back Harold Joseph being one of the many English imports they have enjoyed hosting. Having risen from Division 6 to Division 3, the village club have had to build a new stand – using local timber – and crowds are now above 400, creating a festive atmosphere at their tranquil riverside ground in the woods.

“Having the English guys has been excellent for us,” says Gottne assistant manager Mats Falck. “They are all different and bring qualities to our club. Shola is a wonderful guy to work with. He is the politest player I’ve ever met and is so humble. We would welcome him back any time.”

For more information on the Player Placement Programme click here