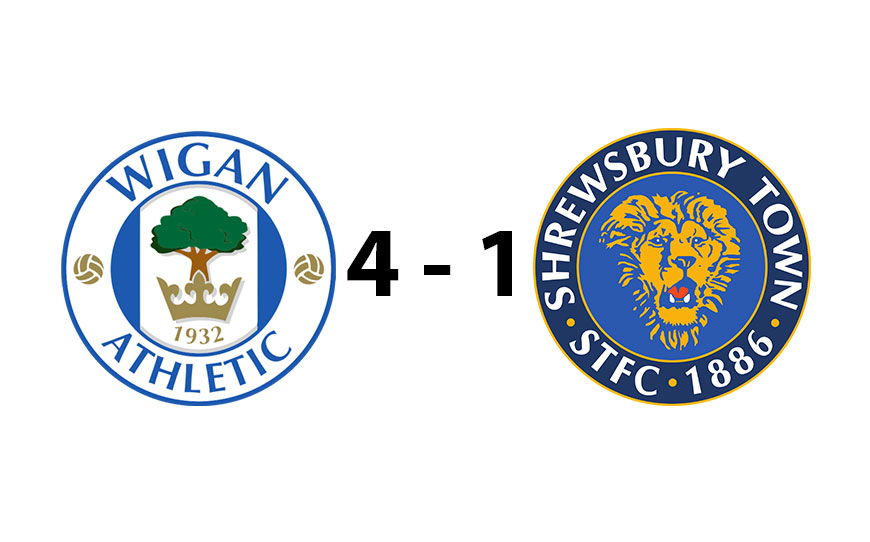 By Niall Concannon: Wigan Athletic maintained their six point lead at the top of the EFL Youth Alliance North West division after cruising to a 4-1 victory over Shrewsbury Town.

Joe Gelhardt scored twice, while Will McGuffie and Charlie Jolley also got on the scoresheet, with Tyrone Ofori providing a consolation strike for the Shrews.

The visitors are without a win since February, but made a confident start as they enjoyed a significant amount of possession in the early stages, although they failed to truly test the Wigan defence.

However, the Latics entered the game having won 15 of their last 17 league matches and it was not long before they found their groove as Jamie Cotter played a perfectly weighted through ball to Gelhardt, who fired home at the near post to open the scoring after 25 minutes.

England Under-16s international Gelhardt doubled his tally just two minutes later after collecting possession from a corner before unleashing a shot at goal that deflected off a Shrewsbury defender and into the net.

The Wigan striker almost completed a hat-trick shortly after, but was denied by keeper Cameron Gregory, although he could do nothing to prevent McGuffie’s free-kick, which rifled into the top left corner.

Shrewsbury responded well after half-time and came close to reducing the deficit through Lifumpa Mwandwe when he pounced on a loose ball and surged through on goal, but his effort was well saved by Jordan Perrin.

Centre-back Luke Ward then failed to keep a header down as the away team threatened to find a way back into the game, but it was the Latics who extended the margin with 20 minutes remaining when a swift counter-attack saw Jolley cushion home a volley to put the result beyond doubt.

The Shrews finally got the goal they deserved on 75 minutes when Ofori found space to strike a low shot into the bottom right corner, providing small consolation for Eric Ramsay’s side.

The Shrewsbury Under-18s manager told LFE: “I actually thought we played well for large spells but were poor in critical moments and ended up in a position at half time that I never thought we’d be in.

“In the second half we responded really well and showed character but I was disappointed with the end result.”

Latics Under-18s manager Nick Chadwick said: “It was a real tough game for us, Shrewsbury are a tough team. We lacked a little bit fluency to our play today but we scored some great goals.

“Obviously, you want to win football matches and I think that helps in terms of the players’ development, but we also want to see good performances and good behaviour from the players.”