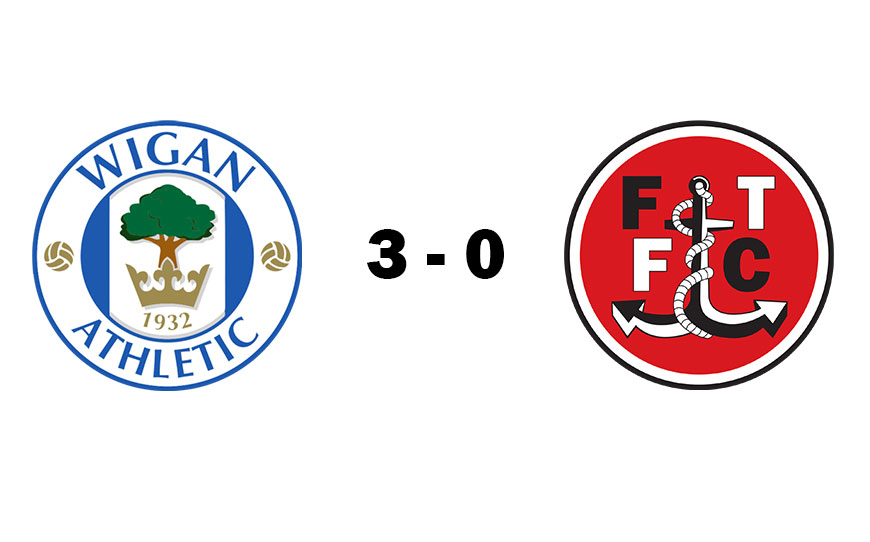 By Harry Ewbank: Wigan Athletic Under-18 made it 10 league wins out of 11 with a 3-0 win over Fleetwood to extend their lead at the top of the Youth Alliance North West Division.

James Berry set the Latics on their way with two first-half strikes before Divin Baningime settled proceedings in the closing stages to condemn the visitors to a third successive league game without a win.

Wigan created most of the early chances and continually looked for the ball over the top to striker Kyle Joseph, with the Scotland youth international threatening to break the deadlock after just failing to connect with a cross from close range.

The visitors looked dangerous in attacking areas, with wingers Shayden Morris and Barry Crowe causing concern with great skill and early deliveries into the box, though Latics towering centre-back Emeka Obi was a match for everything.

Wigan had scored in every game in all competitions so far this season and they continued that streak when some neat link-up play between forwards Joseph and Berry led to the latter being tripped inside the area.

Second-year apprentice Berry picked himself up and held his nerve from the spot, calmly tucking his penalty away to put the hosts in front.

Fleetwood responded well to the setback and showed positive intent to produce an equaliser, with a curling effort from left-back Ryan Rydel flashing narrowly wide of the bottom right-hand post.

However, their hopes of restoring parity were scuppered when the Latics doubled the margin before half-time after a determined run down the right flank from Mitchell Culshaw allowed him to deliver towards Berry, who was in the right place at the right time as the ball rebounded in off him following an initial save by the keeper.

The away side again looked promising after the break, but Wigan stopper Bobby Jones was at hand to deny them a way back into the game, racking up a handful of impressive saves.

Fleetwood were given further impetus when the home team were reduced to 10 men as Culshaw received a second booking for a late tackle.

But they were unable to make the most of their man advantage and conceded a third in the dying embers of the match when
Baningime cut inside from the left and fired a low shot under the keeper to extend Wigan’s unbeaten league run to 22 games, dating back to the end of January.

Latics Academy manager Gregor Rioch was less than impressed with the display, however, although he reserved a special mention for Berry after bagging his brace.

“We got the result, but the performance was way off today. I’d probably say it was the worst of the season,” Rioch told LFE.

“James has been brilliant after just coming back from a long-term injury – I’m sure he will continue to get better and better.”