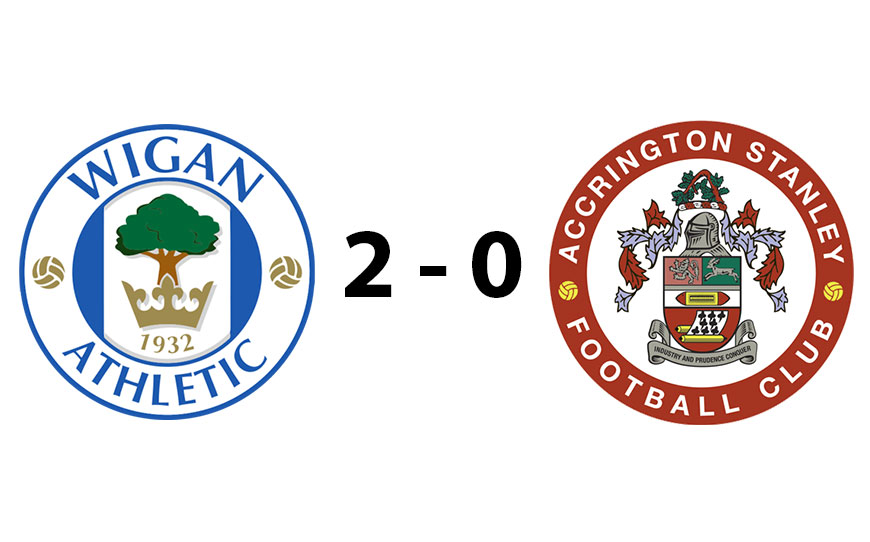 By Niall Concannon: Wigan Athletic Under-18s climbed to the top of the Youth Alliance North West Division after registering their seventh consecutive league win with a 2-0 victory over Accrington Stanley Under-18s.

Goals from Emeka Obi and Divin Baningime were enough to get the three points as the Latics capitalised on Rochdale’s draw with Tranmere Rovers to become the league’s new pacesetters.

The Latics started the game strongly, with their two full backs providing width and support in their attacks. The first major threat of the game came after 19 minutes when left-back Bradley Roberts had a strong claim for a penalty, but it was turned down by the referee.

It was not long before the deadlock was broken, however, as captain Joe Downey’s corner was diverted in by Emeka Obi after the tall defender rose highest to meet the delivery.

The hosts continued to apply pressure, but struggled to gain further success as Jack Butler narrowly missed the target from Tylor Golden’s cutback, while Obi headed over the bar from another Downey corner.

Wigan thought they had finally doubled their advantage just before the hour mark through Charlie Jolley, who calmly finished off a neat team move, only to be denied by the linesman for offside.

However, the goal did arrive four minutes later as Baningime pounced on a loose ball and rifled into the net for his third league goal of the season, opening up a two-goal cushion.

The visitors rarely troubled the Latics goal and their best chance of the game came six minutes before the end when a corner towards the near post was headed just over the crossbar.

Nick Chadwick told LFE: “I was really happy today, it was a solid, professional performance and they did the jobs that were asked of them.

“The league table is a good indication of how we’re playing, but the main aim is to keep developing the players.”