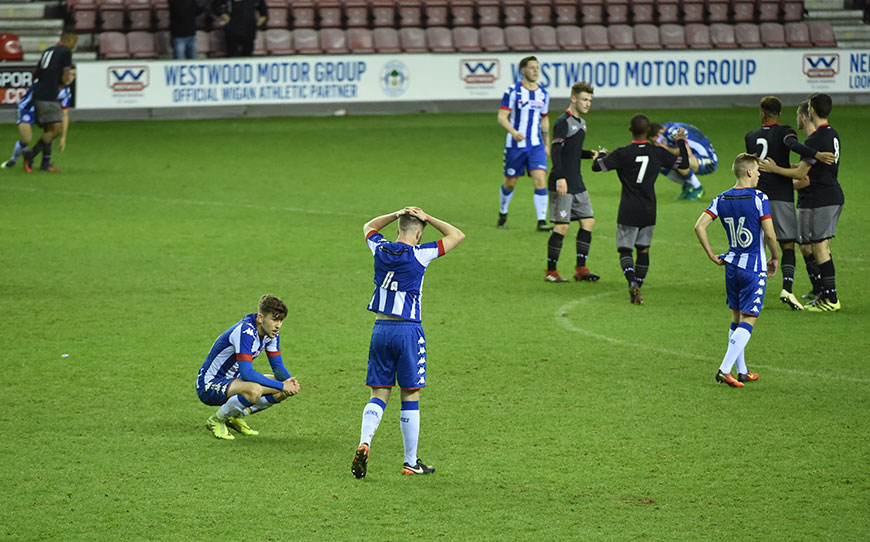 By Matthew Brown: Southampton came from behind to reach the FA Youth Cup fifth round with a 2-1 win over Wigan Athletic at the DW Stadium on Wednesday night.

Tom Powell’s early strike deservedly put the hosts ahead but the visitors grew into the game and levelled matters before capitalising on a missed penalty to grab a winner in the closing stages – like they had done against Manchester United at Old Trafford in the previous round.

The Latics continued to control proceedings but were unable to add a second goal before the visitors’ equalised mid-way through the half. Tyreke Johnson won the ball back on the left for Southampton and his cross was met by Afolabi who powered his finish into the top corner.

Wigan continued to take the game to their Premier League opponents and could have regained the lead in the 35th minute but Shane Donaghey saw his penalty saved by Adam Parkes after Jamie Cotter had been brought down.

Callum Lang’s strike was saved at the near post and Powell narrowly volleyed over with an acrobatic effort after the restart, as Wigan continued to press forward on the attack.

However, Southampton weathered the storm and replaced their goalscorer, Afolabi. His replacement made an immediate impact and proved to be the match-winner, tapping in from close range in the 75th minute.

Wigan boss Nick Chadwick had mixed emotions after the game, with a tie against Manchester City or Liverpool awaiting the winners.

“In one way I’m disappointed and in another way I’m pleased with how we played,” he said.

“Perhaps we could have gone from midfield to the final third a little bit more decisively and created one or two more chances, which our play would have warranted. A category one academy of Southampton’s sort of stature, in terms of youth team football, have come here and we’ve totally dominated the game.”

“I was quite confident that if we carried on moving the ball and controlling the tempo of the game with the possession that we had, that we would carve out another chance. Obviously, that changed when they scored, but if we had gone on to get a second I think we would have won the game.”

“We want to breed good football and good performances but also a winning mentality in the way that we play. In the bigger picture it’s a positive performance, but the reality is that we are out of the competition,” he added.