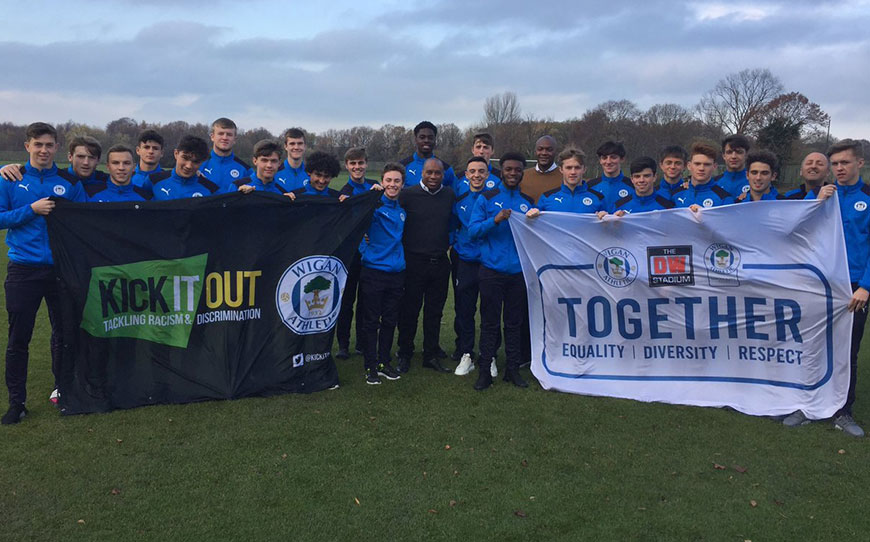 Academy players at Wigan Athletic were provided the opportunity to increase their knowledge of equality and diversity with an LFE Life Skills session from Kick It Out, delivered by Troy Townsend and Marcus Gayle.

The workshop covers a range of important topics, including racism, homophobia, sexism, faith, disability, social media and the impact of acceptable/unacceptable banter in a changing room environment.

“Troy and Marcus do a great job in getting their message across,” Latics Head of Education & Welfare Mike Hurn told LFE. “It’s no nonsense, strong messages, but fully engaged with the boys. Lots of sensitive topics in there that the boys aren’t used to discussing.

“They hear about them, read about them, see them on social media, but don’t perhaps embrace them too much, so I think it’s been a real learning afternoon for the boys. They took them out of their comfort zone and the lads responded really well.

“I think a few of them have been opened up to a few different issues and there was a realisation of language that they use, music they listen to, embracing different things and treating everybody equally and fair and making their own changing room a good environment.”

In support of Stonewall’s Rainbow Laces campaign, the session featured particular attention to raising awareness of the LGBT equality and inclusivity in sport and society as a whole.

Hurn continued: “We’re all about developing the person as well as the player and we fully embrace equality and diversity. We want the boys to be open-minded and embrace different cultures, different beliefs.

“The boys have asked ‘can I wear these for the game on Saturday’, so I’m hoping a lot of them will wear the laces. We had a bit of fun with it with different ways of wearing the laces. It just makes them mindful of why I am wearing these, what’s the purpose behind it and of course we will reinforce those messages throughout the next few weeks.”

First-year apprentice Thelonious Aasgaard said: “You’ve got to learn that some people are different and if you have got a team-mate that is gay or bisexual you’ve got to help them feel comfortable in this environment.

“It’s really important, especially for the football community. Troy said there’s not many people that have come out as gay or bisexual because in the past it’s been a laughing matter in the changing room, so it’s important we change that.”

“If you wear them it just makes people more comfortable around you, it makes people feel more confident to be themselves. If they know that you support these kind of foundations like LGBT then they’ll be themselves around you and they don’t have to hide who they truly are.

“I think it’s really beneficial because it opens your eyes to other things that you might not be aware of, so having sessions like this is really beneficial for people like us in the football world because you could slip up on something that you never knew.”

Adam Long echoed those thoughts. He added: “I’ve never experienced it before with someone coming out gay or bisexual, but I reckon after that session if someone in our changing room were to do so, then everyone would be really supportive of it.

“Players have come out in the past and had to suffer from it which I don’t think is fair on them at all for being them and they don’t feel like they can be themselves after it as well. To keep gay or lesbian people in football, we need to show that they are welcome.”