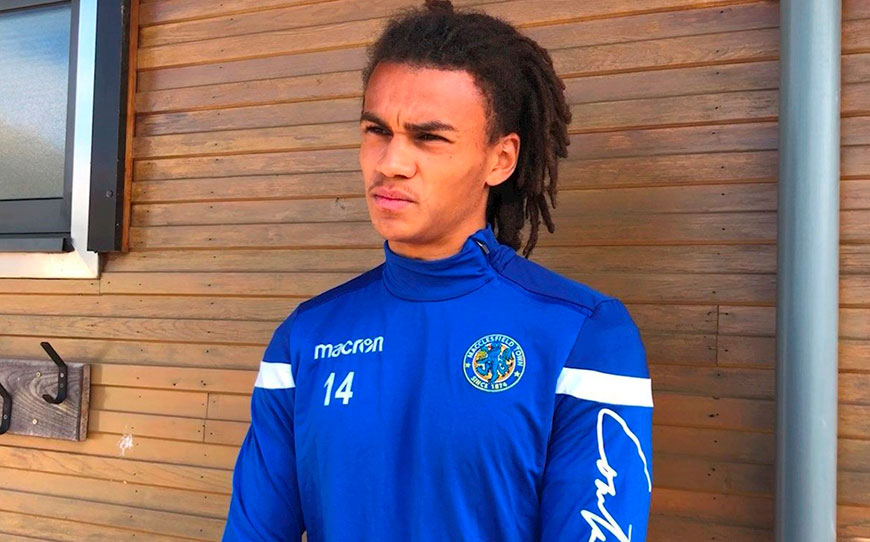 Miles Welch-Hayes’ football career so far has been a tale of overcoming obstacles. At 16, he was deemed too small to merit a two-year scholarship as an Academy footballer before eventually earning a professional contract and making his Sky Bet League One debut three years later.

Now standing 6ft tall, the former Oxford United apprentice is back in the EFL with Macclesfield Town having dropped out of full-time football last season.

“It depends how you react when you have a setback, but for me it gave me extra motivation,” he told LFE. “When things don’t go your way, that’s the time to work even harder. You’ve got to set your target and then out-work everyone else that’s currently where you want to be.

“Football is a crazy game and you’ve just got to keep working hard and keep knocking on the door for a chance and if you’ve prepared correctly you’ll be rewarded.”

Welch-Hayes’ first stumbling block came in 2013 when he was enrolled onto Oxford’s one-year YDS programme instead of becoming an apprentice, but showed early signs of his determined attitude as he went on to flourish in the U’s youth set-up.

He said: “The club thought I wasn’t physically ready, which was very frustrating and hard to take as the rest of my friends had been signed. But it actually ended up helping me in the long run because they put me on a gym programme that set me up for my apprenticeship.

“There was a big focus on maintaining discipline. There were times when you would actually be forced to miss training sessions if your work wasn’t up to scratch, so that really enforced how important it was to keep up with your education.

“We also had to do jobs around the club, like cleaning boots, cleaning the corridors and changing rooms and stuff like that. It keeps you grounded and earns you respect from your actions as a person, not just as a player.”

After temporary spells at Banbury United and North Leigh as an apprentice, Welch-Hayes worked his way into Michael Appleton’s first-team selection at the Kassam Stadium, playing the full 90 minutes of a 2-0 defeat to Fleetwood Town in August 2016.

“It felt like all my hard work to get a scholarship and then earn a pro contract had all paid off,” he added. “Watching the games and being around the players and coaches means you learn a lot more about the game and your own game, so it’s a lot to take in at first but it’s all positive.”

But that proved to be the defender’s only senior appearance for the Yellows and he was released at the end of the 2016-17 campaign, eventually moving on to Bath City in the Conference South.

“I was gutted but it never crossed my mind that I would ever give up,” said Welch-Hayes. “Obviously it was a big change going from full-time to part-time training, but I just made sure I did a lot of work on my own whenever I had the time to keep myself sharp and ready to perform.

“I played with Chey Dunkley at Oxford and he’s been a big influence for me because he’s been through that process of being released and dropping down. It’s really important to be open to advice from people who have gone through the same situation.

“He’s spoken to me if I’ve ever been struggling and kept me on track by just saying keep your head down, keep grafting and you’ll get back up the leagues. I looked at his journey and it inspired me that it’s definitely achievable, so that really helped me keep my focus and carry on giving it my best.”

Having lost his professional footballer status, Welch-Hayes raised his commitment to the game even further in a bid to revive his career with countless hours of individual training.

He continued: “Moving down to non-league, you’re not training every day and it’s not your full-time job anymore, so you’ve got to be committed to do the work on your own whenever possible if you want to keep progressing.

It’s hard work but you can’t get too disheartened. I tried to maintain that mindset of being a professional by putting in the hours and doing all the right things off the pitch and in the end it has paid off.”

Despite his best efforts, the 21-year-old struggled to establish himself at Bath initially, although his endeavours eventually paid dividends.

“We lost our first three games, so the manager changed the team and I wasn’t in it and they went on a run of 10 or 12 games unbeaten after that,” he said. “That was very hard because I’d gone from being in full-time football to getting released to not even playing in non-league.

“It was very mentally challenging because I had put in so much extra work whenever I could over pre-season and then ended up not playing for a couple of months.

“But a few changes happened and I went out on loan to Oxford City in the same division and that really turned things around for me. I had a good game in the FA Cup where we beat Colchester United and then Bath called me back when a new manager came in. I ended up having a great run and was named in the Conference South Team of the Season.

“It was a really good lesson for me to grab my chance and not let go of my place because I knew what it was like to be out of the team and couldn’t let that happen again.”

And after sealing a summer switch to Sky Bet League Two newcomers Macclesfield, Welch-Hayes has gone from sitting on the bench in England’s seventh tier to playing at the London Stadium in the Carabao Cup Third Round against West Ham United in less than 12 months.

“It just makes all the little things worth it,” he said. “You’ve got to be prepared to motivate yourself. Without a full-time coach picking you up or calling you out, you’re the only person who can get yourself out there and put those extra yards in.

“The most invaluable experience from playing in non-league for me was that every time you’re on the pitch is an opportunity to impress and you have to show your best, otherwise you’re just wasting chances to improve your situation.

“It makes you a more consistent player and gets you into good habits. This definitely helped me to hit the ground running at Macclesfield and I felt like I was up to speed straight away.

“Now I see every game as another opportunity, like when I was playing in non-league. It’s important to not get comfortable and keep pushing on and try to get to as high a level as possible.”