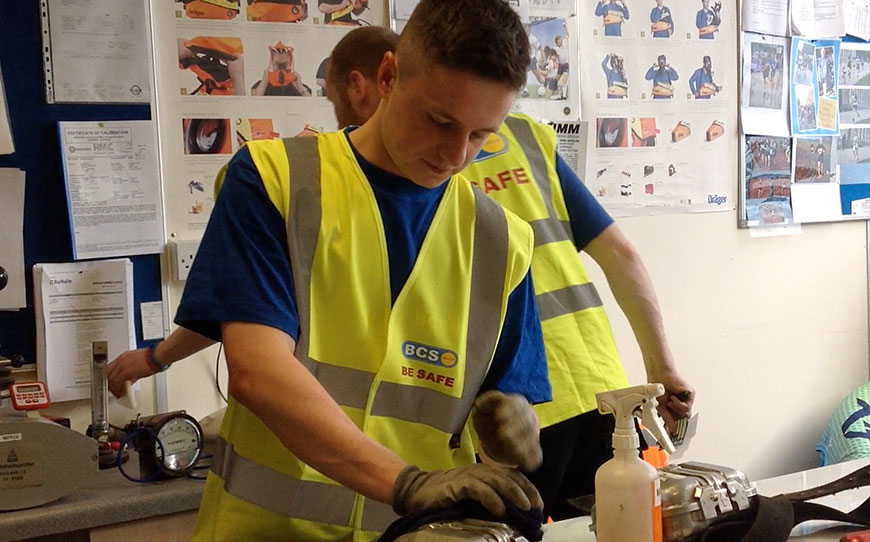 A week or two in a sunny holiday destination tends to be the norm for young footballers at the end of each season. A time to relax, unwind, have fun and see new places.

Yet when the League One season drew to its conclusion in May, Walsall’s apprentices began their taste of the summer in a very different fashion.

The club, conscious of the perception that players can be “sheltered from the outside world” and “disconnected” from the public, ensured that holiday plans were temporarily put on hold as they arranged work placements at local businesses for their apprentices.

It was a different start to the summer and one designed to foster new skills, interests and develop an understanding of diverse working environments with players removed from their comfort zone.

Nine apprentices tackled different roles from the ones they are accustomed to as footballers, in a variety of locations including: The Co-operative Group (Travel & Retail), BCS Group/Barhale, The RAC, Walsall Housing Group and Accord Housing.

“We did this last year for the first time and noticed that it had a positive impact on the lads when they returned after the summer,” club head of education Sue Lane told LFE.

“They (the players) seemed more determined and focused when they came back into the club, so we wanted this type of project to become part of what we do.

“We felt that in many ways they are sheltered as young footballers and we wanted them to step into the shoes of someone in an office environment or a workshop, dealing with customers and other people during the course of a normal 9-5 job.

“They were all apprehensive initially but I went out to see each player and was really pleased by the way they adjusted and interacted in those surroundings.”

Instead of devoting his time to breaking down opposition defences, the Saddlers 17-year-old striker Joe Cairns spent a week at the BCS Group/Barhale alongside teammate Debert Massamba organising the distribution and repair of traffic and road signs, and other safety and construction equipment.

“I worked across two departments, safety and distribution,” Cairns said. “So looking at different pieces of equipment – taking it off the shelf and arranging distribution through the fleet of delivery drivers.

“We were also cleaning equipment down that had been returned to us, looking for and establishing any faults so that things could be repaired. I don’t really like sitting around. I like doing something active so from that respect it was ok, though obviously while football is physically tiring this was more mentally tiring.

“When I did work experience at school I went to a local primary school and was helping assist a teacher and that was a lot easier than this. It was hands-on and demanding.”

Left-back Cody Fisher and midfielder Stefan Mason spent a week gaining experience at The RAC’s iconic operations control centre, which runs alongside the M6 at Bescot. Since opening in June 1989, the centre has handled around 50 million phone calls and dispatched around 30 million patrols to breakdowns.

“It was a good experience,” Mason said. “I was introduced to a lot of the different departments so it gave me an idea of what a number of jobs were like, what they involved and working in an office environment.

“I spent a lot of time working alongside and shadowing customer service representatives who were dealing with complaints and breakdown calls and also got an understanding of how the technical department works, advising engineers on the road about the problems they were encountering.

“It was the total opposite of being a footballer. I was nervous before I went in but I think meeting and communicating with a wide variety of different people each day has helped me to develop my social skills.”

With positive feedback received from the employers involved, back at the Banks’s, the club’s academy manager Graham Biggs hailed a mutually beneficial project that he believes will influence the players over the coming months.

“It gives the boys an insight into a real working environment, other than a football career,” he said.

“This is the second year we have done this and it certainly gave last year’s apprentices the real desire to work harder and give all they had on the apprenticeship.”