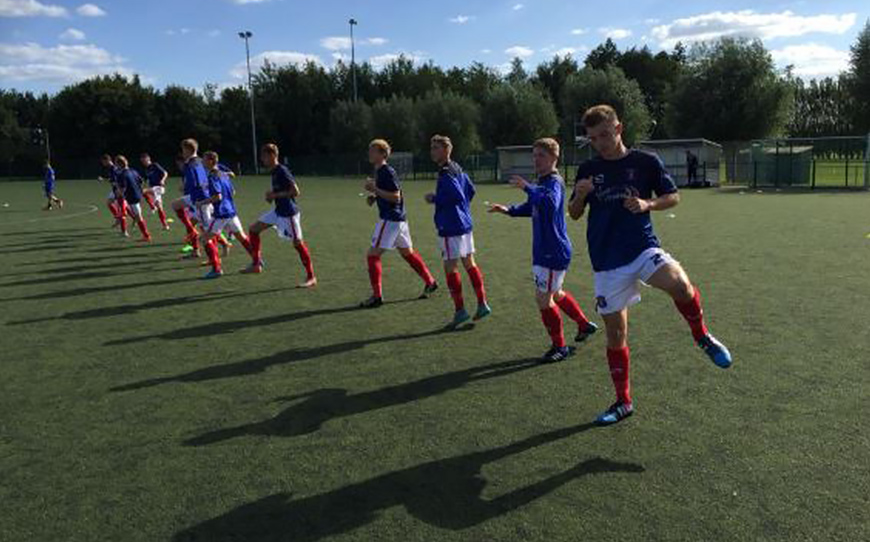 By Gavin Willacy: Carlisle completed a comfortable win over Beveren last night thanks to goals from Joe Robson, Jack Egan and Kieran Hall.

The home side struggled to contain Vince Overson’s team and were left relieved that their margin of defeat was not considerably wider.

The Cumbrians started like a runaway train constructing wave after wave of attacks and seemingly penetrating
Beveren’s precariously high backline at will. Right winger Cameron Salkeld profited greatly from the space he was allowed to operate in.

It is no exaggeration to suggest Carlisle could have been 5-0 up in the first seven minutes, yet somehow the Beveren goal stayed intact. Carl Taylor hit the bar, there were several last ditch tackles and a fine point blank save by the Belgian keeper as Salkeld went through one on one.

The breakthrough finally arrived in the 27th minute with midfielder Joe Robson thrashing home a loose ball from 15 yards out after a corner was blocked on the line and only partially cleared.

Beveren almost equalised within a couple of minutes only for their right winger to shoot inches wide of Tom Fowler’s post. United were superior as Beveren’s midfield challenge was cancelled out but they often fell into the Belgians’ offside trap.

The lead could have been doubled twice just before half-time. First Aaron Bradbury went on a wonderful solo run, skipping past three tackles before curling a shot wide. Then he went clear down the left wing,laid a fantastic chance on a plate for centre forward Kieran Hall, who side footed the ball onto the crossbar from six yards out.

Thankfully, Carlisle soon tied up the win with two goals in two minutes after the break. In the 52 minute, sub Jack Egan calmly slotted home from the right side of the box and seconds later Hall made sure this time, tapping in Egan’s cross.

The game became more balanced with the winners in no doubt, as coach Vince Overson brought on more substitutes and targeted a clean sheet. There was even time for a couple of late yellow cards in a hard-fought friendly, Karlton Rudd booked in the last minute for a late tackle.

Carlisle now face NAC Breda on Saturday morning aiming to maintain their one-hundred per cent record on the trip..