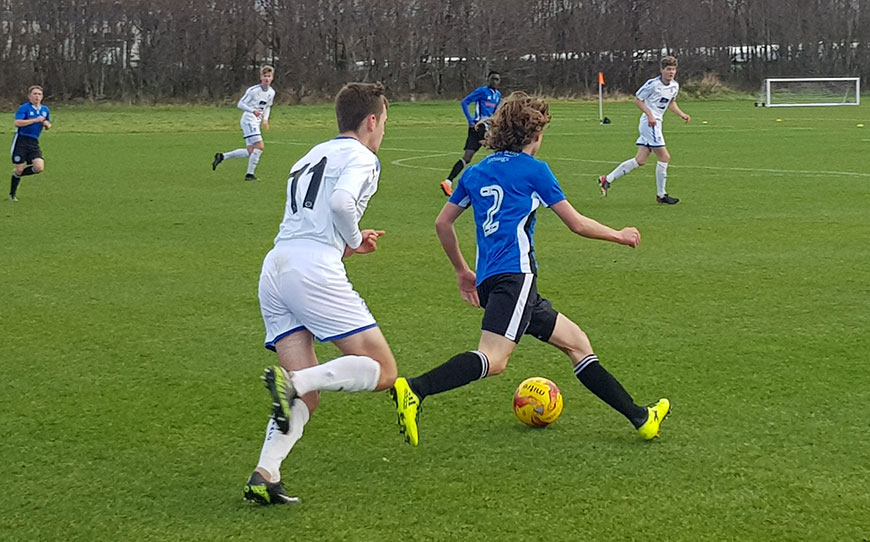 By Andrew Jones: Rochdale Under-18s extended their unbeaten run to five games in the EFL Youth Alliance North West division as they played out an entertaining 1-1 draw with Tranmere Rovers Under-18s.

Tranmere skipper James Devine’s close-range finish 13 minutes from time cancelled out James Neild’s first-half header, but they were unable to find a winner to continue their recent slump in form that has seen them register just one win from their last six league matches.

Dale went into the game having won four in succession and they began in confident mood to create the game’s first chance, with Fabio Tavares finding space in the area and shooting harmlessly wide.

Rovers had been top of the table before their slide in results and offered an attacking threat through Matthew Moreton, whose deflected effort was brilliantly pushed wide by Dale keeper Brad Wade.

However, the visitors hit the front after 14 minutes when Tranmere failed to clear a deep Aaron Morley free-kick, allowing Neild the chance to nod home the opening goal.

The away team almost doubled their advantage soon after as Nathaniel Appiah raced down the left flank and worked his way into the area before rifling a shot over the bar.

Rovers were rattled by going behind and had keeper Patrick Wharton to thank for keeping the margin at one after he made two stops to deny Neild and Joe Renner as the pressure continued to mount.

The hosts managed to weather the storm and showed more intent towards the end of the half, with Danny Walker-Rice’s header being cleared off the line by Daniel Adshead before Declan Drysdale’s follow-up sailed past the post.

The chances kept on coming for both sides. First, Dale’s Florent Hoti slipped through Lewis Bradley, who saw his strike saved by the onrushing Wharton, while at the other end Ethan Devine was denied by Wade and then Bailey Thompson blazed the rebound over from close range.

Following an action-packed first 45 minutes, opportunities were limited after the break, with the best chance falling to Hoti as he struck the bar, although the linesman had already flagged for offside.

Tranmere’s resolute second-half performance was rewarded on 77 minutes when a James Devine converted a free-kick from Ethan Devine to restore parity.

The home side came close to snatching all three points in the final minute of stoppage time after a ricochet sent Thompson through, but he was thwarted by Wade, meaning both clubs shared the spoils.

Andy Parkinson, Rovers Under-18s manager, told LFE: “We set the players a challenge at half time. We tried to make it a lot more difficult and then with ourselves try to take more chances and try to up our performances. We did a lot better in the second half.”

Meanwhile, Dale PDP Coach Chris Brown said: “The lads were a bit disappointed to draw the game but it happens as we didn’t do enough to win the game. The chances we created in the first half were quite good and we just let ourselves down with the quality. Second half, we didn’t back it up.”