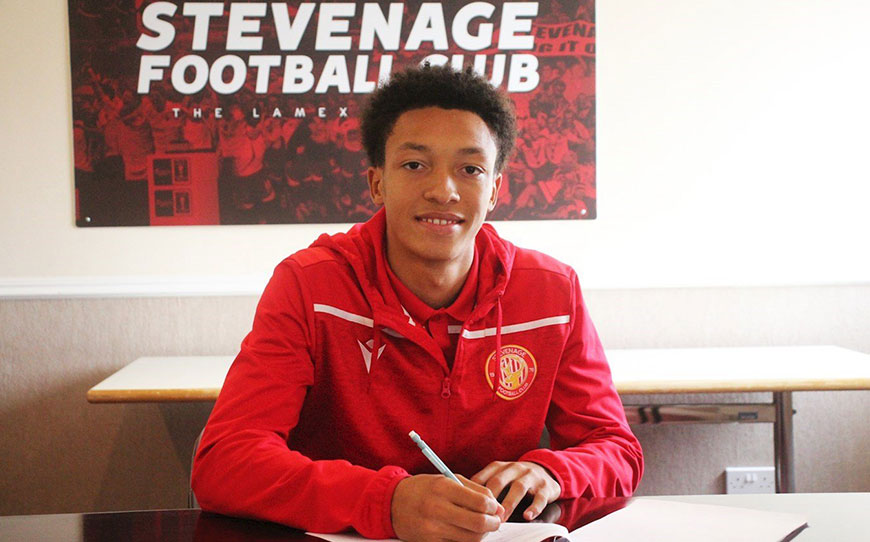 Stevenage FC have tied up second-year apprentice Mackye Townsend-West to his first professional contract, just over a week after being handed his senior debut.

The 18-year-old defender featured for the full game as Alex Revell’s side lost to Milton Keynes Dons in the Papa John’s Trophy earlier this month, while he has also been on the bench for two of the last three Sky Bet League Two fixtures.

“I feel delighted,” Townsend-West told the club website. “It is what I have been working so hard for and now I just want to prove that it was the right decision. I am happy that the manager believes in me and trusts me. Now I want to keep on working hard and progressing.”

Academy Manager Robbie O’Keefe said: “We are all delighted for Mackye. We came across him in a trial game at the start of last season and immediately saw his raw pace and technical ceiling. Lots of credit should go to the academy staff, especially Jorden (Gibson) and Ronnie (Henry) for how they have developed, pushed and progressed Mackye to continually raise his bar.

“Hopefully this is the start of a period of continued success for him as he has to now set new targets and be relentless in achieving them.”

Alex Revell added: “When anyone comes through the academy, it is a credit to everyone who works there. We are trying to reward the players who show excellence every day and then when they come with us, they do the same.

“He has all the attributes to be a top player and he is showing that he wants to learn and that he wants to be better. At his age there is no better quality, so we are delighted for him and for the academy.”