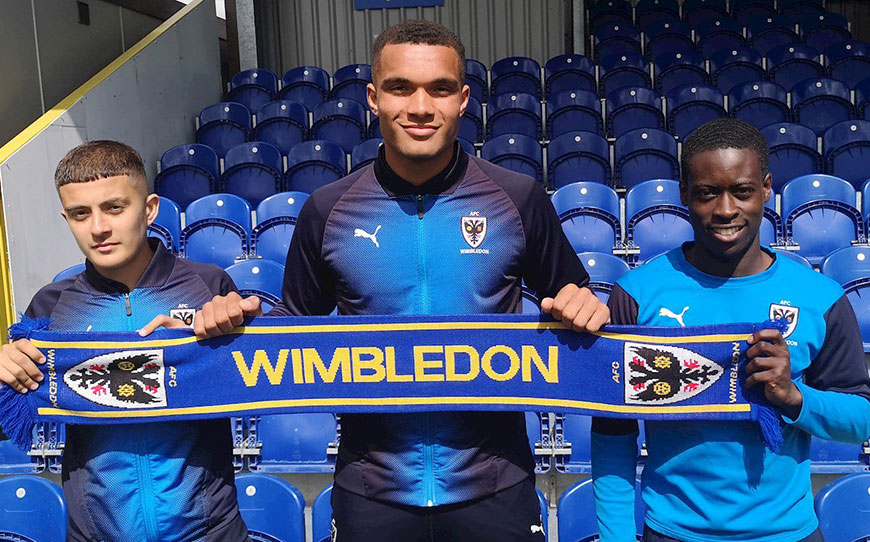 Collins, who joined the club as an 11-year-old, has been a standout apprentice on and off the pitch, which led to him being named in LFE’s ‘The 11’ in December having been a high achiever on the Extended Diploma, as well as performing well for the club’s Under-18s and Under-23 Development Squad.

Towering centre-back Collins told the club website: “It’s a dream come true. Since I was a young boy, I’ve always been kicking a ball around. It’s such an important day for me and my family. Firstly, today marks the start of my professional career and secondly, it’s the club that I started my career at.

“I’m just so happy that I’ve started at this club. When I was 11 and Jeremy (Sauer) invited me down, the club welcomed me with open arms and it’s been so great ever since. For me, I consider this club as a family. There are so many staff members and fans that want to see me progress as a person and as a player. I am just so thankful to be given the opportunity and, once again, I am just over the moon to be honest.”

Academy Manager Jeremy Sauer said: “We always recognised that Reuben had a fantastic attitude – really professional and really driven – but the technical stuff was the area of development for him. Reuben was always one of the bigger kids in the group and people from the outside might have looked at it and said ‘he’s just a big guy’, but he’s also got a heart like a lion and a really good learning attitude. Technically, each year he has got a bit better.

“We are delighted because he wears his heart on his sleeve, he’s got blue and yellow in his blood. This isn’t sentimental the fact that he’s got a pro contract. Reuben fully deserves it and he is going to be a part of this club in the future, for sure. It helps the fact that people around the club know Reuben. On match days people see him around and he really engages with people. Reuben represents a lot of what we want to do as an academy and a club.”

Seventeen-year-old Assal said: “I am very happy. Since I was a young boy I always wanted to be a professional footballer, but there’s still a lot of hard work to come. The academy coaches have put their trust and faith in me. I want to thank Robbo (Mark Robinson) for helping to develop me significantly as a player. I’ve scored 21 goals this season, but the target is to keep getting more.

“After I left Millwall I came here on trial and I got in within a couple of weeks. I’ve kept going from there. This club is built on hard work, so that’s what has to be translated onto the pitch. You can have a bad performance, but you have to make sure that you work hard, especially when wearing this badge.”

Academy Head of Football Mark Robinson added: “Ayoub is a real prospect. He started his football playing in a cage, like you read about with a lot of street players. He has that real rough edge to him, where you can see that he’s come from street football. It means he does some wonderful things on the ball. He is great to watch on his day.

“What I’m trying to get into him is that he can be just as effective off the ball as on it. If you look at his size, people will think he is clever on the ball, which he is, but he’s also got some great assets off the ball. He is really tenacious, he loves pressing and the physical side of the game. He’s only a first-year apprentice, so we’ve signed him early, which we don’t do very often.”

“Andy May (manager of the college team) told me that he had this lad who was doing really well as a striker,” said Robinson. “Paul came in and he was very quick, but I also noticed that he had a long throw-in! I’m sure Paul won’t mind me saying it, but I just felt as a forward that when he got brought to a stand-still, he did not have a particular trick. I toyed with the idea of playing him further back and he showed that once he’s running with the ball he is so exciting.

“Then it was a matter of ‘could we show him the defensive side’? To be fair, he’s worked really hard. He’s still got loads to learn, he knows that, but now he is showing the attributes of a left-back. He has a great leap for his size and he’s working hard on his crossing and positioning. He’s come so far in such a short time and there’s no reason why he won’t continue his development.”

Osew, who has played first-team football for Raynes Park Vale, said: “It’s every young boy’s dream to become a professional footballer and I’m grateful that it’s happened to me today. I am not going to lie, when Robbo first put me at left-back I was thinking ‘What am I meant to do? When do I bomb on and when do I stay back’? I guess I just adapted and started learning. I just got better with the game understanding.

“From what we’ve done with Robbo, I’ve really learned a lot about the history of the club, including what it has been through. It makes you want to wear the badge. I’ve trained with the first-team and it’s quite physical. It’s much faster, but I know I will adapt and become a better player.”