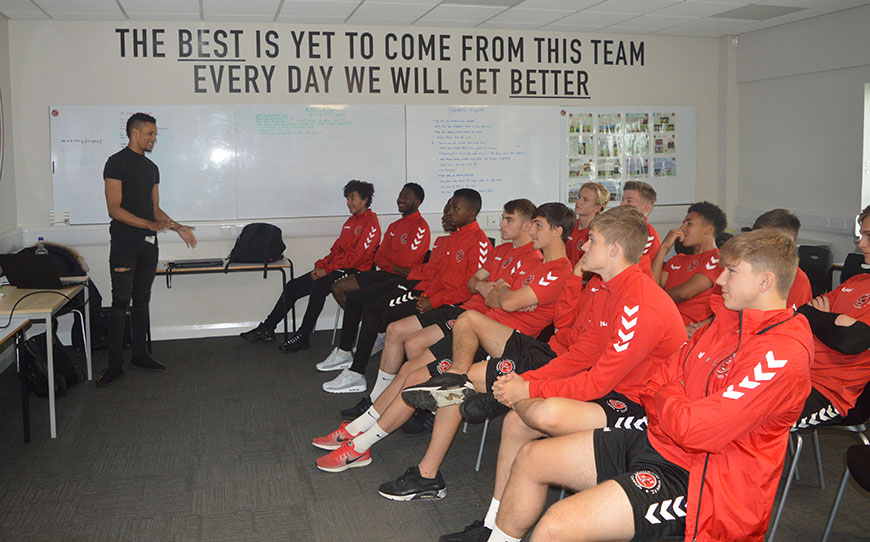 Fleetwood Town’s apprentices reviewed the benefits of developing themselves in and out of football during an LFE Life Skills session delivered by Crawley Town Academy product Cecil Jee Thomas.

The 23-year-old was released at the end of his apprenticeship in 2014, but has used his transferable skills from football to become the poster boy for the prestigious Italia Conti dance academy, as well as an array of other showbiz commitments.

“I deliver a Talent Transfer talk about having a career alongside football and preparing for it early,” Thomas told LFE. “Whether you’re a first or second year, make sure you get started early because if you don’t get a professional contract, you don’t want to get dropped into the world thinking ‘what do I do now’?

“Luckily, I’d kept up with my dance training throughout my time as a footballer and I transcended into becoming a successful performer. I do lots of amazing shoots and jobs – I danced for Little Mix’s ‘Reggaeton Lento’ video, I’ve body-doubled for Marcus Rashford, I’ve worked alongside ITV as a presenter, so I’ve just transferred a lot of my talents from football into performing.

“Football’s not your full story, it’s just a chapter of your life, so it’s important to build a lot more chapters to finish the story. I want them to prepare early, get things in place, do education, look at other careers, use your standing in football to network with influential people and just create a career that can help you in the future.”

Pursuing alternative options as an apprentice is not just preparation for life after football, however, with Thomas highlighting current players who have become successful in other areas during their playing career, like Vincent Kompany, Paul Pogba and Theo Walcott.

He continued: “There are a lot of skills that transfer from football over to plenty of industries. You’re dealing with players that come internationally, so you have to talk to new players and be very vocal in the workplace. When you’re on the pitch you have to communicate and be a leader, so there are so many skills that transfer.

“Mine mostly came through my athleticism, like being physically fit and able to jump high. Also, when I went down the leagues and played at a lower level, all of my stress and focus that I had in football that made me play badly just went away because I had my performance and dancing to focus on.

“So when I got on the pitch it felt like I had more freedom and I was at my best during this time, so the key is just to prepare because it frees up your mind and makes life so much easier.”

Defender James Hill featured in Joey Barton’s first-team against Leicester City in the Carabao Cup in August, becoming the club’s youngest ever player in the process. Yet despite his success on the pitch, the 17-year-old admitted he is keen on exploring different interests.

“I thought the session was great because it shows that you’ve got to have an open mind,” he said. “There’s more to life than football, you’ve got to have your education to go with it and it’s not the end if you don’t make it in football because you have plenty of talents and there’s opportunities outside of football for everyone. This session reinforced that there’s no harm in being prepared.

“I’ve managed to make my debut and I’m doing very well right now but you don’t know what the future holds, so I just need to make sure I’m on top of it and have alternatives in place.

“My dad is an ex-professional footballer and he’s at the end of his career now. I’m interested in what he does, which is network marketing, so I’m quite keen on business and would like to pursue it further after my career or even alongside football.”

Meanwhile, second-year apprentice Greg McCaragher added: “It was really interesting to find out about what aspects of life there are outside of football, so you don’t feel like you’re trapped. It’s definitely opened my eyes as there are industries within football and also outside of football that we can use our skills to move into.

“Looking back to school, I was always interested in languages, so that can lead to jobs within or away from football, with jobs like a translator and stuff like that, so that’s something that I’d definitely be interested in researching now.

“You’ve got a lot of spare time as an apprentice, so one of the main things I took from the session is to make use of that time. Don’t just go back to your room and watch Netflix, make better use of it and help your future by looking at different Universities or industries.

“Sometimes it can be a bit too much to just be solely focused on football and you need time to open your eyes to life outside of football and what other opportunities there are, so sessions like this are very beneficial.”

This story features in Issue 37 of LFE’s Touchline magazine.