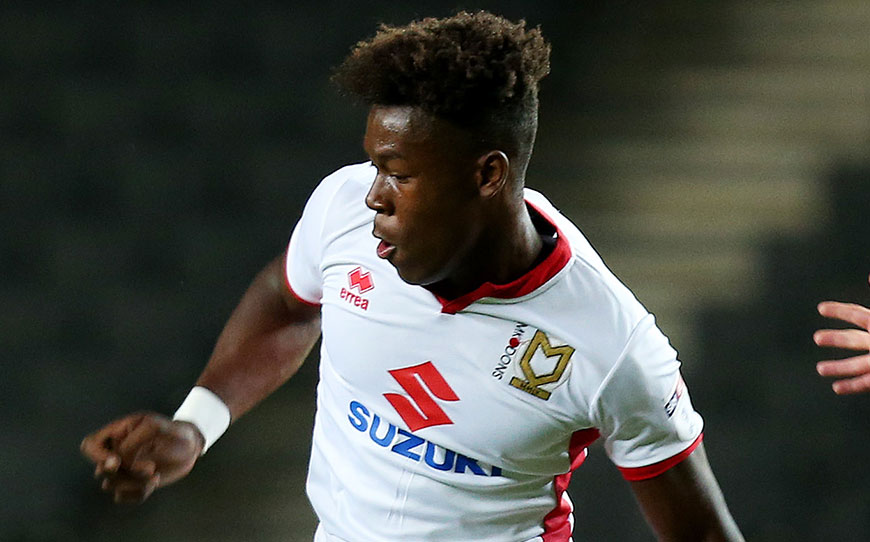 Milton Keynes Dons youngster Brandon Thomas-Asante has agreed an extension to his contract to remain at the club until June 2019.

The 19-year-old is a graduate of the Dons academy and featured 12 times in the first-team during the second-year of his apprenticeship following his senior debut against Shrewsbury Town in August 2016.

Thomas-Asante netted his first goal three months later in a 3-2 FA Cup victory over Spennymoor and has earned further involvement this season, making another 12 appearances in all competitions, although he is yet to make a start in Sky Bet League One.

“I’m so pleased to have put pen to paper,” the teenage striker told the club website. “I’m thankful to all around me for their support.

“We’ve been talking in the last couple of weeks. I couldn’t wait to get things signed so I could carry on with my football at this Club – this is my hometown team and I love playing here, in front of the fans.

“I just can’t wait to kick on now and show everyone what I’m capable of. I know I can do more and I’m not going to stop until I do.”

Meanwhile, Manager Dan Micciche said: “I’m very proud of Brandon. I’ve seen a lot of him while I’ve been away from the Club and I’ve been really impressed with his development.

“He’s established himself as a first-team squad member but there are still a lot of steps left in Brandon’s development. Knowing the boy as I do, this will be just the start for him.

“He’s very dedicated to the game and he’s got a great work-rate so this will be a motivation to take the next step. He’s a local boy so I’m sure the fans will get right behind him.”

Thomas-Asante becomes the fourth Dons academy product to commit his future to the club during the 2017-18 season. Current apprentices David Kasumu and Dylan Asonganyi both signed their first professional contracts in December, while academy graduate Callum Brittain penned a new deal last week.