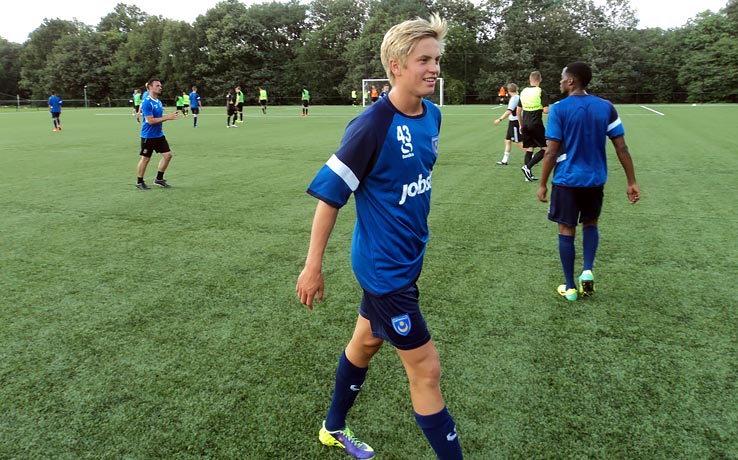 First of all, I would like to introduce myself – my name is Snorre Nilsen from Norway and I’m a second year apprentice at Portsmouth FC. Our youth team was chosen by LFE to fly to Holland for 12 days on a pre-season tour to train, learn and play games as well as experiencing the philosophy of Dutch football.

For the next 11 days I will be keeping you updated on what we experience on our tour to Holland.

It was an early start on Monday. We had to be at Fratton Park ready to leave for Heathrow at 4.15am!

Everything went smoothly and as we sat down on the plane all set to take off, we received the message that our flight was going to be delayed three hours by the torrential rainstorms that started as we got on board.

An announcement said that flights between England and Holland had been stopped and we were not allowed to get off the plane and get back on but fortunately we ended only waiting 2 hours to get underway.

When we finally arrived at the hotel (8 hours after setting off!) – the Grand Tulip in Doorwerth, (which is excellent and has very pleasant staff) we ran into Sporting Lisbon’s first-team team who were also staying here.

They have been here a week and were playing Utrecht on Monday night before going home.
After lunch we borrowed city bikes from the hotel and set off on a bike ride to get the journey out of our systems.

It turned out to be our version of the Tour de France! Everyone was racing through the woods and cruising down the country roads. We checked out the surroundings and the pitch where we will be training later in the week before heading back to the hotel for a swim and dinner.

It had been a long day with all that travelling but we are just very happy to be here and ready to get the tour going!

Today’s been a long day with two training sessions during which we were coached by the academy coaches from our host club, Vitesse Arnhem. The facilities were incredible: a small stadium with 500 seats was the Under 19’s home, the pitch was perfectly cut and the clubhouse was brand new. All the club is based there from the juniors to the first-team. A short walk further down the path through the woods and we found loads of grass and astroturf pitches and we were not the only team training there today.

We found Vitesse reserves, Under-19s and Under-17s and Chelsea all in the same place! We couldn’t see much of Chelsea training as they’d closed off the pitches with big fences, but we walked past them on the way back from the afternoon session as they went out to do their second session. Stars like (Didier) Drogba, (Cesc) Fabregas, (Diego) Costa and (Nemanja) Matic and so on were casually walking past us.

Not only that, but during our session Jose Mourinho decided to come over to watch us playing with the Vitesse Under-19s. He sat on the bench watching us play for 15 minutes before heading over to coach his own session. Incredible!

We went back to the hotel for ice baths and then dinner and a team meeting. Some of the lads had been given a forfeit for leaving some personal belongs behind after dinner the previous day. They had to sing a song in front of the whole squad.

A couple of lads sang the ‘Fresh Prince of Bel Air’ which included a few dance moves, but the highlight was our striker Lewis Gill, (who is known for being a unit with a deep voice) delivered a rendition of ‘Island in the Stream’ by Dolly Parton and Kenny Rogers.

Both staff and players were laughing so hard that it brought tears to our eyes and it is definitely the funniest moment so far on the tour (if not pre-season). However, there’ve been more forfeits given out today so I’ll report back on any performances of note next time