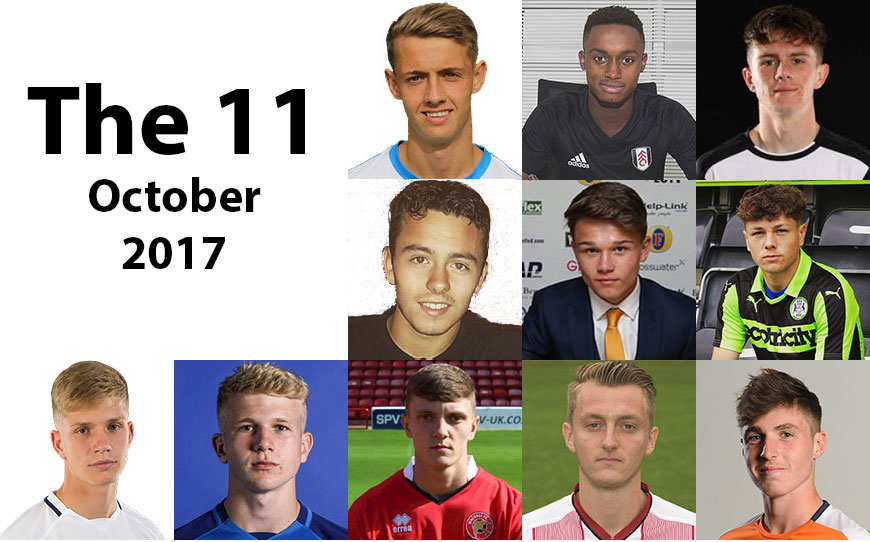 LFE takes a closer look at the players to make ‘The 11’ in October 2017 and why they’ve been included:

Niall has made great progress both on and off the pitch during the first few months of his second year as an apprentice and was even handed a first-team debut in September.

Having produced a string of impressive displays for the Under-18s, he earned a spot on the bench for Stanley’s 3-2 Checkatrade Trophy victory over Middlesbrough Under-21s and was brought on with four minutes remaining to contribute to the team’s stoppage-time winner.

Niall has also gone from strength to strength in the classroom and is currently exceeding his target grade at college despite being exposed to the senior set-up.

First-year apprentice Max is being tipped for the top having already bypassed the Under-18s team to become a regular member of Derby’s Under-23s after amassing over 30 appearances across both teams prior to beginning his apprenticeship.

The young midfielder was then thrust into first-team action as the Rams were beaten by Barnsley in the Carabao Cup in September, with Max playing 81 minutes on his senior bow six days short of his 17th birthday.

And his month got even better when County handed him his first professional contract a week later, penning a three-year deal.

Despite the hectic start to his first-year, the teenager has not allowed his studies to slip either. LFE Regional Officer Ian King said: “Max has started well on his BTEC Level 3 Diploma and is coping well with the additional requirements of being in and around the first-team training group.”

Jordan has enjoyed a whirlwind start to the 2017-18 season having begun in a rich vein of form in the Under-18s before making the leap into the first-team, prompting the offer of his first professional contract.

Regional Officer Roger Gibbins said: “Jordan has started the programme like a house on fire! He has attracted interest from a number of EFL and Premier League clubs and manager Mark Cooper has realised his potential by signing him up to a pro contract.”

The 17-year-old registered almost a goal a game from midfield in the Youth Alliance South West, which encouraged Rovers boss Cooper to hand him a two-year deal.

Jordan has since featured twice off the bench in Sky Bet League Two and then netted the winning goal 10 minutes from time in the Checkatrade Trophy against Cheltenham Town having been introduced as a 76th minute substitute.

Cooper told the club website: “Jordan is a promising young player who spent time with us in pre-season and now needs to train with the senior squad full-time to maximise his development.”

Steven has been somewhat overshadowed by twin brother Ryan’s exploits at Craven Cottage, but he has made great strides this season by earning two Carabao Cup starts in August.

The England Under-17 international signed his first professional contract in June and has shaken off a long-term knee injury to contribute for club and country at various age groups this campaign.

Academy Education Manager Sean Cullen said: “Steven spent most of last season fighting back from serious injury, but never let his frustration get the better of him, dedicated himself to the academic part of his apprenticeship and worked hard on his recovery.”

His hard work was rewarded early this season when he made his debut for the first-team in the Carabao Cup win away at Wycombe. Steven is currently away with England for the Under-17 World Cup in India and forced his way into the line-up, making three successive starts, including two clean sheets, to help the Young Lions reach the semi-final stage.

Striker Connor made a name for himself as a first-year apprentice with 17 goals in the EFL Youth Alliance North East, as well as earning two substitute appearances in Sky Bet League Two near the end of the 2016-17 season.

And he has continued that momentum by becoming the first Pools player born this century to score a goal for the first-team when he used his 6ft 5in frame to convert a towering header on his first senior start against Maidstone United at the beginning of September.

His effort was voted the club’s Goal of the Month for September, a month in which he made three appearances in the National League to reportedly attract Premier League.

Jamie has shown impeccable professionalism to return from a long-term injury which spanned the majority of his first year and has established himself as a vital member of the Under-23s this term, as well as maintaining a high standard in his education.

Academy Manager Adam Underwood told LFE: “Jamie has displayed an exemplary and consistent approach to his football apprenticeship. He has been with the Under-23 squad from the age of 16 in his first year until injury and has continued to be a consistent and high performing player.

“He is studying the Level 3 Extended Diploma and is currently meeting his DDD target grades. Jamie has high standards in school and can be relied on to complete homework and assignments to deadline and is an active and curious learner.

“Jamie has attended local football team events to hand out new kit and support participation at grass roots level. He has also supported local charity initiatives in his spare time and helped raise money for a local man who developed a life limiting illness and could no longer work.

“His attitude towards self and team improvement is a credit to himself and more importantly a great example to others. Jamie always conducts himself in a manner befitting a professional footballer at Leeds United and he is a credit to the club’s academy.”

Full-back Jack has been thriving as a player and a student during his apprenticeship so far after achieving successful marks in the classroom as well as earning a first-team debut.

The second-year apprentice was handed his first taste of senior football in the Checkatrade Trophy against Tottenham Hotspur Under-21s in August, coming on as a half-time substitute.

‘JJ’ has not allowed his progress to get in the way of his education, however, and is currently working above his target grade in the BTEC Extended Diploma.

Regional Officer Gavin Willacy said: “Jack has been an excellent scholar so far on the pitch and in the classroom. Luton have produced a lot of players from the academy into the first-team set-up in recent years and JJ is the latest one to be excelling.”

Lewis experienced a frantic start to his apprenticeship in July 2016 when he was promoted into the first-team for all of Peterborough’s pre-season friendlies.

However, he showed great character and ability and impressed so much that he was awarded a three-year professional contract just five weeks after becoming an apprentice and has continued to progress ever since.

The left-back made four starts in Sky Bet League One in April following loan spells at Cambridge City and St Albans City and has recently been sent on another temporary switch to National League outfit Guiseley.

Lewis has kept on top of his education too, despite the distraction of entering the first-team fold so quickly into his apprenticeship.

“In the classroom, Lewis’ attitude is relentless,” Posh Academy Manager Nick Sheppard told LFE. “Despite a busy season training and playing with loan clubs and first-team commitments, Lewis completed the most NVQ units and stays well ahead in his BTEC.

“Such is his profile he has been called upon to attend community visits where he meets young players and is fast becoming an excellent role model.”

Lewis suffered a difficult first season as an apprentice with a lengthy spell on the sidelines due to a broken leg, but he is making up for lost time this season having made an admirable recovery.

The defender has been installed as Under-18s captain and has led from the front by topping the goalscoring charts with four so far, while he has also appeared in the reserve side and trained with first-team.

Regional Officer Sarah Kayley said: “Lewis sets a fantastic example on the education programme, working hard and contributing within the classroom and is on target to achieve his Extended Diploma.

“As youth team captain, Lewis is a great role model and has ensured a harmonious dressing room, with both first and second years enjoying a good relationship.”

Centre-back Ben was awarded his first professional contract at Boro towards the end of his first year and has progressed into the first-team this season, all while achieving high grades on the Extended Diploma.

The 17-year-old featured for the first time in the senior side at the start of October, playing the full game in a goalless draw against MK Dons in the Checkatrade Trophy.

“Ben has been an exemplary scholar in all areas of the apprenticeship,” Regional officer Gavin Willacy said. “He is a high achiever and even harder worker in the classroom and on the training field and is a great example to the rest of the group.”

Mitch was introduced into the senior team in April during his first year, making five appearances in Sky Bet League One following his debut against Bradford City and has been given two further outings this season.

The striker netted for the first time in a pre-season game against Chester and penned a three-year professional contract in August despite national papers reporting interest from a number of Premier League clubs.

After the 17-year-old signed professional terms, Saddlers Manager Jon Whitney told the club website: “Mitch has shown great promise since he started to come into the first-team. He started back with the Academy this summer and his efforts have been exemplary.

“It was great to hand him his professional debut and he has had a great pre-season, getting his goal against Chester. He’s got great potential and he reflects our core values so we have rewarded him with his first professional deal.”