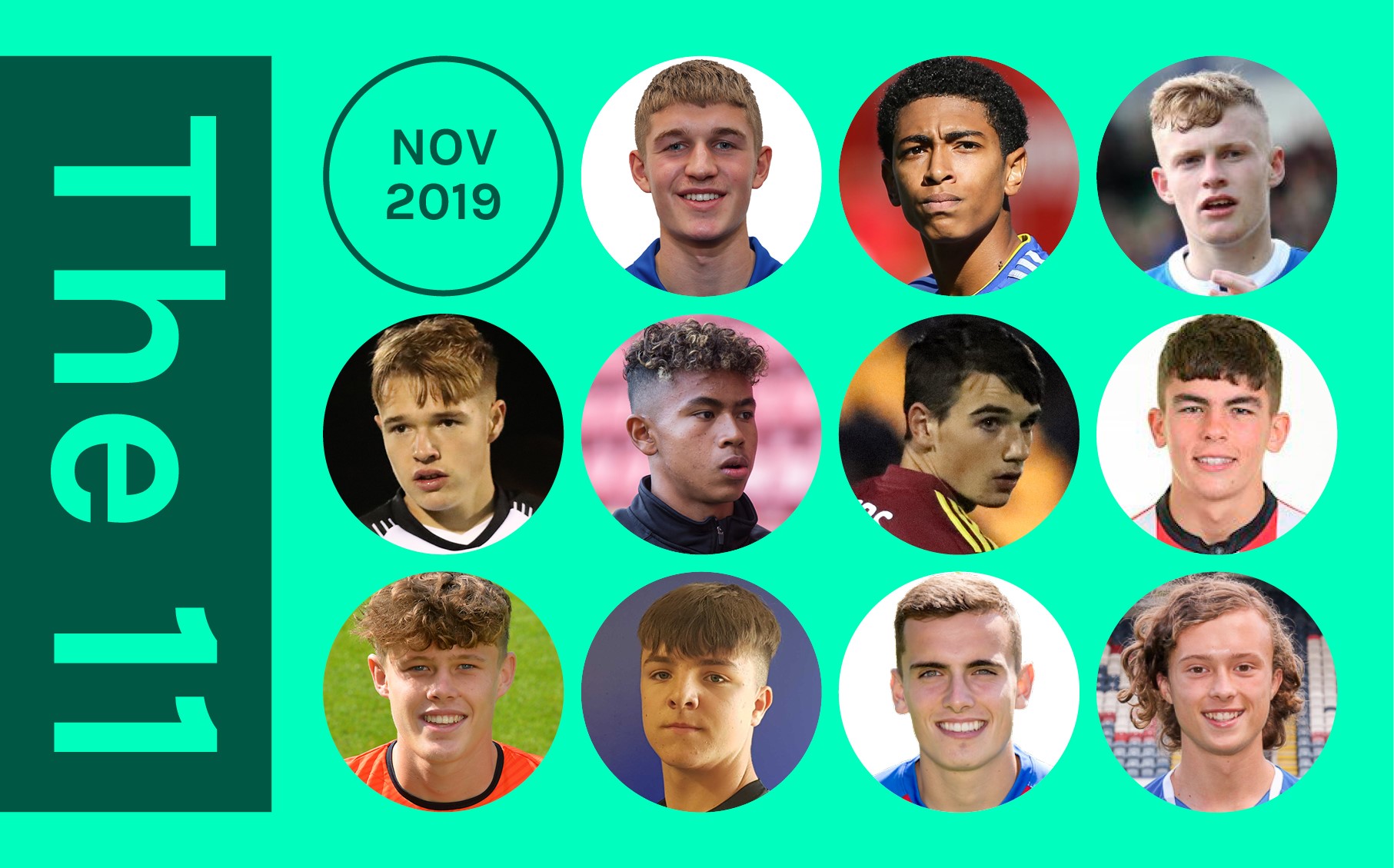 LFE takes a closer look at the players to make ‘The 11’ in November 2019 and why they’ve been included:

Central defender Jack is already an experienced Welsh youth international and penned his first professional contract at the end of October having made his Sky Bet League One debut as a late substitute at Burton Albion.

In addition to his on-field success, which also includes a full debut in the Leasing.com Trophy, the 17-year-old achieved A* grades across the board in his GCSEs and is on course to attain a Triple D* profile in his BTEC to compliment his NVQ, which he successfully completed in September.

Academy Education Manager Stuart Page told LFE: “Since joining the club as an Under-13, Jack has been a popular and key member of each age group. He shows a maturity beyond his years and his single-minded focus and dedication can be found in his studies too.

“Jack has a bright future in the game and with such a mature attitude and studious foundation, there can be little doubt that he will be a big success both on and off the pitch.”

Sixteen-year-old Jude wasted no time in making his mark on Birmingham City’s first team, becoming the club’s youngest ever player and youngest ever goal scorer in August.

The highly-rated midfielder has already established himself as a mainstay for the Sky Bet Championship side, while he has also made great progress academically, remaining on track with his BTEC programme and an additional Sociology A-Level that he is undertaking in his own time with support from the club.

As well as this, the England youth international is a keen advocate of community and charitable organisations, showing particular support to the Mustard Seed Project, which aims to develop education facilities and provision across Kenya.

Head of Education & Player Care Mark Sinclair told LFE: “Jude is an excellent role model for all player within our Academy. He works hard to make sure that he not only fulfils his role as a first-team player, but also to ensure that he is committing to his apprenticeship programme and continuing to develop himself as an individual.”

Despite Carlisle United’s struggles in Sky Bet League Two, Jarrad has been a shining light, establishing himself as a regular in the starting line-up since his EFL debut in October.

The 17-year-old, who signed a professional contract in February, was selected as man-of-the-match in his second league start and became the club’s youngest ever goal scorer against Morecambe in the Leasing.com Trophy, while he also donned the captain’s armband during the second-half.

His playing commitments have not affected his focus on education, with the commanding defender continuing to attain Distinctions on the Extended Diploma.

LFE Regional Officer Paul Urwin said: “Jarrad has a top-class attitude, which has seen him maintain his target grades while also developing into a first-team player. Having made excellent progress in his first year, Jarrad has put himself in a great position to achieve on both fronts.”

Liam has displayed a tremendous work ethic both on and off the pitch, with his performances in all areas reflecting his diligence and hard work.

In the classroom, the second-year apprentice is completing the Extended Diploma and is predicted a triple Distinction, while he has trained regularly with the first team, played for the Under-23s and been an integral part of Derby County’s successful UEFA Youth League team.

“Liam has the respect of staff and his peers and is a pleasure to have in the club,” Simon Ord, Head of Education & Welfare, told LFE. “He works well independently and as part of the group, taking personal responsibility for his academic studies.

“Liam participates in all of the club’s personal development sessions and will be working as part of the group with a local primary school after Christmas.”

Sixteen-year-old Vaughn has been forced to quickly work a balance between football and education having trained with the first-team on a permanent basis since making his senior debut at the start of October.

Having been an unused substitute in the Carabao Cup in August, the exciting winger played the full 90 minutes and scored a penalty in an 8-7 shootout victory over Coventry City in the Leasing.com Trophy.

Meanwhile, Vaughn is studying the Extended Diploma and has managed his time wisely to remain on track with his work in spite of his extra commitments with the senior squad.

LFE Regional Officer Roger Gibbins said: “Vaughn is a very conscientious lad, who works well in college even though he is progressing rapidly as a player and training regularly with the first team. He has made an excellent start to all aspects of his apprenticeship and has displayed the work ethic and temperament required to maintain that success.”

Attacking midfielder Liam may only be a few months into the apprenticeship programme, but he has already appeared at senior level for Ipswich Town having been introduced for the final few minutes of their derby defeat to Colchester United in the Leasing.com Trophy.

The 16-year-old was rewarded for his impressive performances in the Under-18s, as well as several outings for the Under-23s, while he is also making strong early progress academically.

LFE Regional Officer Gavin Willacy said: “Liam is impressing greatly both on and off the pitch. He is tackling the BTEC Extended Diploma and currently meeting his Distinction target grade, plus also making positive strides with his NVQ.”

Since returning for the second year of his apprenticeship, Gianluca has stepped up his efforts academically, with the 17-year-old working at a D*D*D* grade profile on the Extended Diploma – surpassing his triple Distinction target.

Playing-wise, the young defender has been a leader at the back for the Under-18s and helped Lincoln City reach the third round of the FA Youth Cup, contributing to a clean sheet and scoring in a 3-0 win against Wrexham to set up a glamour tie with Manchester United.

LFE Regional Officer Carl Craner said: “Luca has had a really good period both in the classroom and on the pitch. He is a mature, hard-working student and – according to his coaches – demands high standards from other players and is always striving to improve his game.”

Two significant injuries ruled out Sam of the first couple of months at both the start and end of his first year, but has overcome that adversity and signed a development contract in October.

Although he is yet to make his professional debut, the left-footed midfielder did feature in some pre-season friendlies and went on the club’s summer training camp in Portugal, with Academy & Development manager Andy Awford describing him as “the right type of person that we want at the football club.”

LFE Regional Officer Gavin Willacy added: “Sam’s maturity has seen him earn the honour of being the club’s Head Apprentice this season, which is his tenth with the Hatters.

“Despite his struggles with injury, he has done enough to extend his future at the club and he has also impressed sufficiently in class to move up from the Diploma to the Extended Diploma, where he is hoping to achieve DDM overall.”

Tyler grabbed the headlines in November when he became Oxford United’s youngest ever first-team player, making his senior bow in the Leasing.com Trophy win at Crawley Town aged just 16 years and 98 days.

The talented winger has also established himself quickly as a positive influence in the classroom, meeting his target grades and working hard in all areas of the programme.

“Tyler has made an excellent impression in the first few months of his apprenticeship, both on and off the pitch,” said LFE Regional Officer Gavin Willacy. “His positive attitude has shone through and he has overcome the challenge of being the youngest apprentice in the group. Not only that, but he is also living in digs, away from his home in High Wycombe.”

Harry has enjoyed an outstanding season so far, captaining in every Under-18s game and featuring in Under-23s fixtures.
Elsewhere, he is working above his target grade and is currently on track to achieve triple D* grades by the end of the qualification.

A natural leader, the second-year apprentice was selected by staff to be the club’s first ‘Head Apprentice’, where he has set the standard for the rest of the group to follow.

Head of Education & Welfare Jon Slater told LFE: “Harry shows excellent behaviours in all the he does. His professional attitude to all aspects of the apprenticeship has helped his development this season. He always shows a conscientious approach to all educational programmes.”

It has been a whirlwind start to the apprenticeship for Luke, who has been a standout performer for club, country and in his education.

The promising full-back made seven appearances as an Under-16 last season and has continued to feature regularly this term, including a magnificent display in the Carabao Cup against Manchester United at Old Trafford, where his second-half volley forced a penalty shootout and thrust the 17-year-old into the media limelight.

Luke, who has earned five caps at England Under-18 level, is also studying three A-Levels – history, psychology and sociology – and despite his busy schedule, the highly-rated youngster is making encouraging progress with his studies.

LFE Regional Officer Craig Skinner said: “Luke is a role model for all apprentices due to his professionalism on and off the pitch. He has undertaken a difficult task in attempting to balance his significant playing and academic commitments, but his maturity, focus and desire have allowed him to find a working formula to succeed in both areas.” 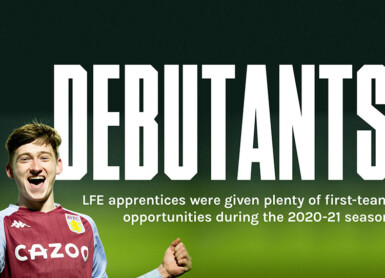 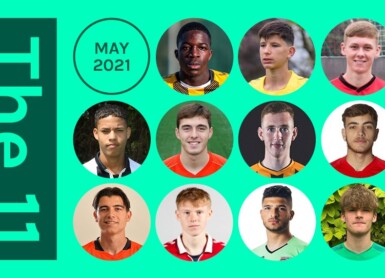 We use cookies on our website to give you the most relevant experience by remembering your preferences and repeat visits. By clicking “Accept”, you consent to the use of ALL the cookies. However you may visit Cookie Settings to provide a controlled consent. For more detailed information about the cookies we use, see our Cookies Page
Cookie settingsACCEPT
Manage consent