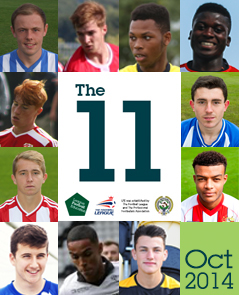 They’ve beaten off competition from around 1300 of their peers across the land so here’s an in depth look at who made LFE’s XI for October 2014 and why they made it.

Goalkeeper Jordan makes LFE’s team for October after earning the plaudits of Ian Smithson and his coach Carl Fletcher who said; “Jordan’s made a very good start to the season being involved with first-team training and matches.

“He has shown an excellent attitude everyday and is having a positive impact in the U21 development training & matches.”

Smithson added, “Educationally he has been mature and conscientious and has made every effort to stay on track with his qualifications, despite his footballing commitments. He recently passed his Maths Functional Skills and I have no doubt he will go on to complete the framework with a strong grade profile.”

First-year apprentice James has made great football strides since arriving at Oakwell on a full-time basis in July.

The 17-year-old defender who has previously interested Manchester United made his debut for the Tykes last May while still a schoolboy and has already made 9 first-team appearances this term.

Away from the pitch James has impressed regional officer Pat Lally, who said,“James has not let this success go to his head and is working diligently on all elements of his education programme. His target grades for the BTEC are set around his Distinction/Distinction profile and I am positive that with the attitude he has shown so far that will be achievable.”

England Under 18 international Max has had a fantastic start to the 2014-15 campaign and dealt with the demands placed upon him by regular action in the Under-21 squad married with his international commitments.

Included by Steve McClaren in the club’s first-team tour to Austria in the summer Max remains a grounded individual who looks set to achieve a Merit/Merit grade on his BTEC and complete his NVQ Diploma in the near future.

Second-year apprentice Callum has shown an exemplary attitude to life at Hartlepool United on and off the pitch. The young forward who is a key member of the Pools youth-team has also earned the respect of Paul Urwin LFE’s regional officer in the North East for his efforts away from football.

“Callum has a fantastic attitude and is a very mature young man,” Urwin said.

“He has combined his studies and job as a footballer while also looking after his Mum as a Carer. She had a serious stroke about 6 months ago and I can only commend him for taking on that added responsibility.

“He’s up at 6am each day to look after her before leaving for training and he then does a 15 mile journey on the bus to get to the training ground yet he’s has not been late for training or for college and has never missed a session.”

September ‘Goal of the Month’ contender Kabongo Tshimanga’s performances on and off the pitch have earned him a place in The 11.

The young centre-forward who has netted 6 goals in his last 5 outings in the Under 21’s and Under 18’s is well on track to complete his NVQ in November and has already passed his coaching certificate.

The club’s director of youth Mike Dove, said; “Kabongo’s has made excellent progress since returning for the second year of his apprenticeship. He has shown growing maturity on and off the pitch and deserves to be recognised for his development”.

“Regan’s really impressed me and started the programme on the front-foot”, said LFE’s Roger Gibbins of Newport’s teenage sensation who has already made his first-team debut.

The 16-year-old defender, who has caught the eye of Manchester United and Fulham has also been earmarked as one for the future by Wales, when recently called-up for their Under 17 UEFA qualifiers against Russia, Belarus and Montenegro.

Nyal Bell is a second year apprentice, who was handed his first team debut in the 1-0 win over Coventry City in September. While he is yet to feature again in Dale’s first XI manager Keith Hill recently offered words of encouragement and an endorsement of the teenage forward’s progress at Spotland.

“It won’t happen on a regular basis, (said Hill of Bell’s first-team involvement) but it was a little bit of an appetiser. The journey is just beginning, it’s not ending. We’re still going to put him through the mill to try and create this player we want for next pre-season so that I don’t have to recruit and that I can recruit from within, and I believe that he’s on the right track.”

LFE’s Craig Skinner added: “Nyal is lightning quick and has many of the attributes needed to make the grade. I know that Keith (Hill) rates him but he has to persevere and continue to work hard.”

Despite the obvious distractions that come with first-team football Louis has demonstrated that he is committed to reaching his full potential in completing the Apprenticeship framework. The youngest ever player to feature for the Blades in The Football League (against Rotherham in April aged 16 years and 257 days ), has worked diligently to catch-up on college work in his own time and has also embraced a number of coaching opportunities at the club’s Academy to aid the completion of his Level 2 coaching qualification.

His ‘Midfield Masterclass’ session was delivered to fellow central midfield players in the Blades younger age squads (Under12’s to Under 15’s) and the youngsters out of hours work hasn’t stopped there.

Taking his new responsibilities and profile as a first-teamer seriously. He recently took time out to help club staff promote a new book celebrating 125 years of Blades history and is scheduled to support Academy charity partner Roundabout, who provide emergency accommodation for young people in need in Sheffield and South Yorkshire, next month.

Ryan made Stevenage history when he made his Football League debut on the final day of last season versus Brentford at the age of 17 years and 215 days.

The young defender now in the second year of his apprenticeship was rewarded with a professional deal a year early with manager Graham Westley, a keen admirer of his talents.

Handed the number 28 shirt first-year apprentice Tom has started life at the County Ground on the front foot and has already been on the bench for first-team as cover for the central midfield position.

LFE’s Roger Gibbins said,“Tom has made the adjustment to full-time training from schoolboy football without any real issues. He has a real chance of doing well as long as he continues in the same vein.”

Former Liverpool apprentice Louis Robles has made an outstanding adjustment to life as a Latic according to LFE’s Claire Wilberforce-Marsh.

The youngster who has found the back of the net 7 times already has already sampled life training with the Uwe Rosler’s first-team squad and looks set to do well whatever he turns his hand to say’s Wilberforce-Marsh.

“Louis has displayed outstanding leadership qualities as the Under 18 captain,” Wilberforce-Marsh said.

“He takes this role very seriously and commands respect from his peers. He displayed a very mature attitude in making the decision to leave Liverpool to enhance his games programme and immediately fitted in at Wigan.

“He displays a very high level of understanding within his academic work and has achieved distinctions in all his BTEC units. He is a very polite, mature young man that will do well in life and would be a credit to any team/workforce.”