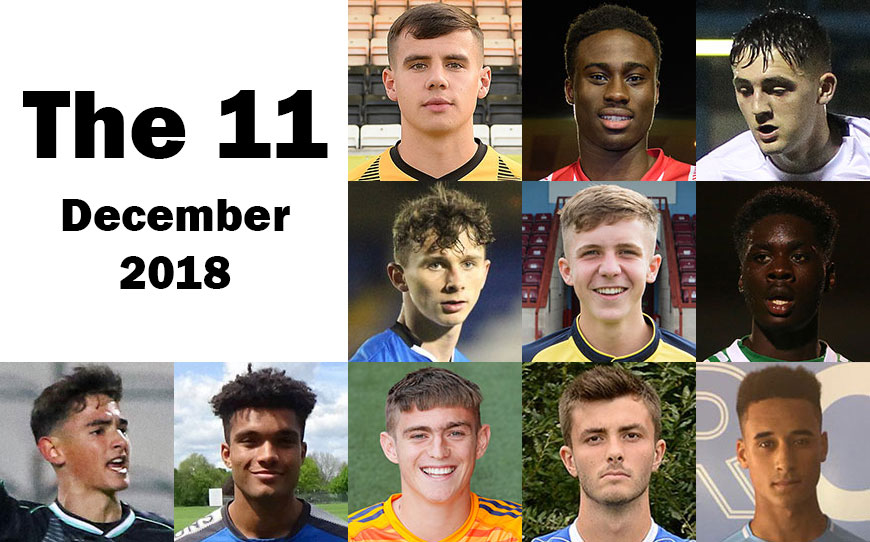 LFE takes a closer look at the players to make ‘The 11’ in December 2018 and why they’ve been included:

Defender Reuben has displayed great commitment to developing himself on and off the pitch, achieving high grades on the Extended Diploma and performing consistently for Wimbledon’s Under-18 team.

The 18-year-old also played a key role in organising and coaching the Under-18s during a fixture against Leyton Orient, in which he oversaw a 2-2 draw.

LFE Regional Officer Tom Palmer said: “Reuben is very motivated to succeeding in the classroom and is targeting D*D*D* grades after receiving great comments in his reviews from all staff.

“In particular, Reuben is renowned for his character, positive attitude and leadership qualities, which led to him being an ideal candidate to coach the team, developing personal and team qualities.”

Ben is progressing at an impressive rate having reached double figures for appearances in Birmingham’s Under-23 team, helping them rise to second in the league table.

The central defender is also a high achiever academically and is attaining D*D*D* grades on the Extended Diploma.

Regional Officer Ian King said: “Ben has shown great resilience to overcome recent adversity and is performing admirably in all aspects of the apprenticeship. He sets a great example to the rest of the group.”

Midfielder Joe featured twice in Sky Bet League One towards the end of his first year and has added three more appearances to his tally in the Checkatrade Trophy, FA Cup and Sky Bet League Two.

The 17-year-old, who has captained Bury’s Under-18s this season, has also received regular call-ups for Wales youth internationals and helped the Under-19s qualify for the Elite Round of the U19 European Championships, scoring in a 2-1 victory over Sweden in November.

Regional Officer Craig Skinner said: “Joe has been a key member of the Under-18s side that has reached the fourth round of the FA Youth Cup and has shown that he can handle the step up to first-team football.

“Despite his first-team involvement and being away with Wales Under-19s, Joe continues to show great commitment to his education and is progressing very well with his Extended Diploma.”

Youth team captain Joe has been a regular in LFE’s Goal of the Month, appearing three times already during his apprenticeship and is currently enjoying a particularly purple patch in front of goal, with seven goals in eight games.

The second-year apprentice has also focused heavily on his education, gaining 11 distinctions in his first year, followed by distinctions in four units so far in his second, while completing 22 of the 23 units on his NVQ ahead of schedule.

Regional Officer Darren Bloodworth said: “Joe continues to push ahead of the group. He deserves a lot of praise for how hard he works, supported by his excellent research skills and his ability to convey his knowledge in his written work.

“The only unit remaining for him to achieve his NVQ is a public appearance, which he will be performing during December. On the pitch, it’s pleasing to see that his hard work for the team is being rewarded with goals and assists.”

First-year apprentice Jared has already made himself a regular in Chesterfield’s Under-18 side, but it’s his performance off the pitch that has been particularly impressive.

The 16-year-old has surpassed expectations based on his GCSE profile and is completing additional units in his own time in order to achieve the Extended Diploma.

“Jared came into football very late and is having to grasp football life very quickly which he is making every effort to do,” said Regional Officer Ian King. “After originally being placed on the Subsidiary Diploma, he has really hit the ground running with consistent Distinction grades and has taken it upon himself to increase his workload to the Extended Diploma.

Jordan has flourished in his first few months in a professional football environment. The first-year striker has found the net with regularity in the EFL Youth Alliance North East division and bagged a hat-trick in the FA Youth Cup against South Shields before scoring against West Bromwich Albion in a third round defeat at the Hawthorns.

His prolific goalscoring record caught the attention of the first-team staff, leading to a senior debut as he played 63 minutes against Accrington Stanley in the second round of the Checkatrade Trophy in December.

“Jordan’s positive, enthusiastic and hard-working attitude extends beyond the pitch to the classroom and beyond,” Regional Officer Darren Bloodworth said. “The work that he produces is always to the best of his ability and he strives to get the best grade with every assignment.

“Jordan is a very competitive scholar who proactively seeks challenges and self-improvement. He has worked extremely hard on and off the pitch and has been rewarded with a continued spell training with the first-team squad.”

It’s been a fantastic few months on the apprenticeship programme for goalkeeper Tyla. The 17-year-old has been promoted to the Under-23s on numerous occasions this season and even made the bench for the first-team in a friendly fixture.

Along with his progress on the field, Tyla has ensured he has maintained the same level of quality and all-round application in his academia which has been great to see.

QPR Head of Education Rob Nicoll told LFE: “Tyla’s attitude and application throughout all areas of his framework has been outstanding and as a result, he has excelled both on and off the pitch.

“His focus and dedication towards his individual training programme has been excellent and he has performed well in matches, while his all-round application in his academia has been great to see.”

Dan was thrust into the spotlight even before starting his apprenticeship, becoming Rochdale’s youngest ever debutant at 16 years and 17 days in a 4-0 Checkatrade Trophy victory over Bury last September.

Since then, the highly-rated midfielder has played at Wembley in the FA Cup against Tottenham Hotspur, captained Dale’s first-team against Leicester City Under-21s and received his first England Under-18s call-up, scoring on his international debut against the Netherlands.

Regional Officer Craig Skinner said: “Dan has made superb progress on the pitch and is already approaching 20 first-team appearances, recently getting his first goal against Oldham.

“Despite Dan’s first-team commitments, combined with his recent England Under-18s call-up for a tournament in Spain, he has shown a great work ethic and dedication to stay on track with his education.”

As captain of The Iron youth team, Tom has set an example to the rest of the group with his performances, drive to succeed and personality, making him well respected by his team-mates.

The teenage midfielder is earning a reputation for scoring outstanding goals and was nominated for LFE’s Goal of the Month in October, leading to progression into first-team training.

“Tom is progressing well at the Academy and has been training with the first-team on a regular basis,” Scunthorpe Education Officer Ian James told LFE. “In November, he was in the first-team squad for the Checkatrade Trophy against Mansfield Town, making his debut appearance as an 86th-minute substitute.

“Tom continues to set an example off the pitch, too. At college, he is doing the BTEC Extended Diploma and is progressing well with his qualification, remaining on target for success.”

Goalkeeper Marcus was heavily involved on the international scene during his first year, featuring in the Under-17 Algarve Tournament and keeping a clean sheet on his debut in a 2-0 win against the Netherlands before being included in the UEFA European Under-17 Championships squad that reached the semi-final stage.

At club level, the 17-year-old has already signed his first professional contract, regularly represents the Under-23 side and has been out on loan to Gainsborough Trinity, while he has had various opportunities to train with the first-team.

“Marcus has enjoyed great success on the field with Sheffield United and England, which has made his academic progress even more impressive,” Regional Officer Paul Bartlett said.

“He has completed his Level 2 Coaching badge, his Level 3 NVQ and is close to finishing his BTEC Level 2 Diploma, so he’s put himself in a great situation off the pitch as well as on it.”

Second-year apprentice Daniel has spent most of this season working with the first-team and was handed his senior debut in November, playing the full 90 minutes of a 4-0 Checkatrade Trophy win against West Ham United Under-21s.

The left-sided youngster signed his first professional contract at the start of December, yet is still remaining focused on his education, passing his Functional Skills in maths and working to MM standard on his Diploma.

Regional Officer Roger Gibbins said: “Daniel is a really good all-round lad and is doing well in all aspects of the apprenticeship, showing good time management and commitment to his academic responsibilities despite progressing into the first-team.

“On the pitch, he played very well by all accounts on his debut which led to the reward of a pro contract, which is very well deserved.”